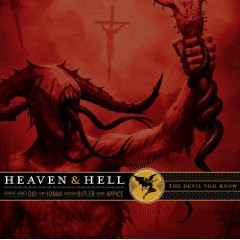 1. Heaven and Hell, The Devil You Know. Call this a fanboy pick if you want, but I’ve continued to return to this record time and time again over the course of the year. I really think the songs here blow away much of the stuff being done by musicians who could be their great-grandchildren.

2. Trans-Siberian Orchestra, Night Castle. Fans waited a long time for this one, and it was worth it. It’s got a good blend of rock and classical, with some of the most metallic moments on any of their records. There are also a couple of Savatage covers thrown in for good measure.

3. Alestorm, Black Sails at Midnight. Alestorm’s second record is just as much fun as their first was, and the music is better.

4. Amorphis, Skyforger. I find myself firmly back in the Amorphis fan fold after this record. To me, it’s easily the best thing they’ve done since “Elegy.”


5. Saint Deamon, Pandeamonium. This was my introduction to Saint Deamon, and I was immediately impressed. It’s got a great blend of heaviness and melody.


6. Megadeth, Endgame. No, it wasn’t “Rust In Peace” part 2, like Mustaine promised, but I didn’t expect it to be. It’s a rock solid record that’s among the best, if not the best they’ve done since the 1980s.


7. Luna Mortis, The Absence. I’d reviewed a record from this band under their former name, Ottoman Empire, but couldn’t remember much about it. The first album as Luna Mortis, though, pretty much blew me away early in the year.


8. Machines of Grace, Machines of Grace. The band features two former Savatage members, and it’s no secret that I’m a Savatage fanboy, but the music has little to do with that band. This is old-fashioned 1970s-style hard rock with a few progressive leanings.


9. Black Water Rising, Black Water Rising. I’m not sure if this record has officially been released yet, but I’ve been digging the promo since April. It’s some of the best straight-up hard rock I’ve heard in a while.

10. Alice in Chains, Black Gives Way to Blue. I didn’t want to like Alice in Chains without Layne Staley, but I do.
Posted by Fred Phillips at 1:30 PM