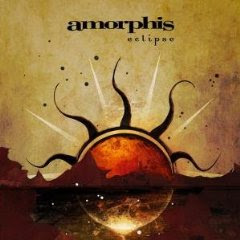 The evolution of Amorphis, for me, has been one of the most disappointing musical turns in recent memory. I was a latecomer to the band, only discovering them with "Elegy," an album that completely blew me away. It was exactly the kind of music I was searching for at the time, melodic and moody, yet still satisfyingly heavy. But things started to unravel from there, and instead of becoming one of my favorite bands, they fell off my radar with progressively weaker albums, culminating in the snooze-inducing "Far From the Sun," which, to my ears, is almost unlistenable.

So I didn't have very high expectations for "Eclipse" despite some of the return to glory hype that I was hearing about it. I don't quite know if it's a return to glory (and of course there are some fans who would argue they never fell from grace), but the record is surprisingly enjoyable. New vocalist Tomi Joutsen seems to have injected a little new energy into Amorphis, not to mention bringing back the death vocals, albeit in a minor role. One of the things I loved about "Elegy" was the interplay of clean and death vocals, and it's nice to hear it again at least a couple of times here. Joutsen's voice is a good fit with the style of the album, with the clean vocals having a bit more of a modern rock sound than his predecessor Pasi Koskinen.

As they have frequently before, Amorphis turns their attention to Finnish mythology for inspiration, taking the story of Kullervo from the epic "Kalevala" as the concept for the album. Kullervo is a tragic figure, somewhat akin to Oedipus in Greek mythology. His father is killed by his brother Untamo, who then sells Kullervo as a slave. When he escapes slavery, he finds his family alive, but his sister missing. He later, unkowingly, meets and seduces his sister, who kills herself out of shame. Out of revenge, Kullervo kills Untamo and his family and later kills himself.

OK, this is about music, not Finnish mythology, but I explain the story so that I could say that the music on this album is very fitting for such a dark and twisted tale. It's overall somber and melancholy, but with occasional roars of anger and rage. At times, I am reminded of "Elegy," but at others, it's a much more ethereal and moody, occasionally reminding me a little of fellow Finns Sentenced or some of Opeth's mellower work.

The album opens solid with "Two Moons," showing the band locked into a groove and announcing to the world there's a new vocalist in the mix. The goth influence starts to come in on "House of Sleep," which mixes a commercial-sounding opening with a verse and chorus that evokes Sentenced. We welcome the death vocals back into the fold with the third track "Leaves Scar," which opens with a folky, acoustic intro leading into a nice heavy riff and the first Amorphis growls in a long time. "Perkele (The God of Fire)" provides the heaviest track on the album, showcasing the death vocals more than any other. It's certainly not as heavy as anything from "Tales from the Thousand Lakes," but it does approach "Elegy." On the other end of the spectrum, but equally impressive, is "The Smoke," which opens with a surprisingly upbeat acoustic strum and a guitar lick that reminds me of one of the few electric licks on Opeth's "Damnation." The brief death vocal bits on the song are used to perfection and provide a great punctuation on the clean vocals.

Fans looking for the more complex structures of the band will appreciate "Born From Fire," a mid-tempo number with some cool layered guitar themes and nice slower interludes. There are also plenty of folk and traditional influences throughout the album to appreciate. You won't really find any big epic numbers on this album like you might expect for the style of music. Most check in around 3 1/2-4 minutes, with only the final track, "Empty Opening," reaching the 7 1/2-minute mark (and then, two of that is tacked on silence).

"Eclipse" marks a return to a heavier form of music for Amorphis while maintaining the atmospheric, ethereal sounds they've experimented with on the past few albums. Fans of those records may be a little disappointed with what is, in some ways, a step back toward an older style, but there's enough experimentation here to keep it fresh. I personally like the record better each time I listen to it, as I discover some new small touch that I missed the last time through. For the first time in a long time, this album has made me look forward to what Amorphis will do in the future.

Get "Eclipse."
Posted by Fred Phillips at 7:18 PM No comments: 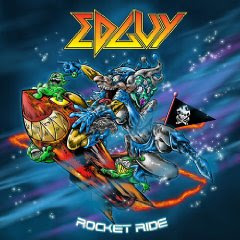 Listening to Edguy's "Rocket Ride," I can certainly see why fans of the band's Maiden-worshipping power metal past may not like it. As the cover art suggests, this is a new band, one that likes to have fun and, on occasion get a little goofy. Personally, I kind of like this new version of the band.

"Rocket Ride" completes an evolution begun on 2004's "Hellfire Club" and continued on the EP "Superheroes," the title track of which made its way onto this album. This record represents a shedding of the band's previous power metal skin, revealing a new traditional hard rock layer. There are, of course, still some remnants of their past here so it's not a complete shift of directions, but it is significant. To me, the songs here are a bit more original than some of the band's past work, though.

First, let's get "Trinidad" out of the way, the song that seems to be enraging fans and reviewers alike. To be honest, it's not nearly as bad as I expected. After reading comments and reviews, I was expecting a reggae number, when in fact, it's still a pretty rocking song, just with a little island flavor. In all honesty, I don't really care for the track either, but it's certainly not the abomination that some people are making it out to be. The other low point for me is the ballad "Save Me," which plays like a 1980s hair band ballad. Outside of those two songs, there's not really a bad track on the album to my mind.

There's a very simple reason why you should own this album, though, and it's the sixth track -- "The Asylum." This is, quite honestly, the absolute best traditional metal song that I've heard in a long, long time. It's one of those songs that I catch myself repeating four or five times on the drive to or from work. I can't get enough of it. There's great power in the riff and chorus. A close second is the title track, which has a 1970s arena rock feel on an addictive chorus, complete with a Maiden-like "wooahohoh." "Wasted Time" and "Out of Vogue" are also solid, catchy tracks that stay in the listener's head.

"Return to the Tribe" is a track that I've heard declared one of the best songs on the album, but to me it plays like a pretty standard power metal number. It's not a bad tune, but I feel like I've heard it a thousand times before.

Then there's the goofiness I mentioned earlier, which comes through in two testosterone-laden tracks, "Catch of the Century" and "Fucking with Fire." "Catch of the Century" is a fun song from an arrogant rocker to the girl who left him that ends in a rant that may or may not give you a chuckle. "Fucking with Fire" is pure 1980s cock rock. Fortunately for Edguy, I like pure 1980s cock rock. It's a fun song, not to be taken too seriously, as is much of this album.

If you come to this album wanting to hear Edguy's familiar power metal sound, you'll probably be disappointed. On the other hand, if you've got an ear for classic hard rock and approach it looking to have a little fun, you'll probably like it.

Get "Rocket Ride."
Posted by Fred Phillips at 5:44 PM No comments: