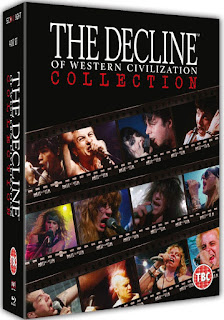 The boxed set collects all three of Spheeris’ Decline of Western Civilization documentaries on Blu-ray, with an extra disc of outtakes and extended interviews. Coming into this viewing, I had seen the first film once or twice, Part II probably a dozen times or more, and I had never seen Part III, which was previously unreleased on video.

The first film focuses on the punk scene of Los Angeles in the late 1970s, with groups like Black Flag, X, and Fear. Penelope Spheeris documents a series of live performances from L.A. punk bands interspersed with interviews with the musicians and other punk fans. It’s the format that all three movies will follow. The focus of this first film is solidly on the music, the ideas behind it and the people who make it.
Read more »
Posted by Fred Phillips at 2:36 PM No comments: