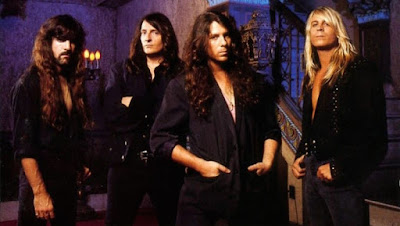 If ever there were a setlist that I’m prepared to cheat on, it’s this one. I didn’t, though (mostly).

Read more »
Posted by Fred Phillips at 2:22 PM No comments: The Dirt delivers exactly what you’d expect in a biopic of Motley Crue – a trashy, but fun tale of debauchery that turns dark but never quite faces its demons. Much like the band’s lyrics, the movie often skips over substance and tough topics in favor of more sex, drugs and rock ‘n’ roll.

I didn’t go into The Dirt expecting a factual, documentary-style account of Motley Crue’s rise and fall. It’s a movie. Some things will be dramatized, some facts will change and some things will be completely made up. The film even acknowledges this in an early aside to the camera from guitarist Mick Mars: He lets the audience know that the telling of how they met legendary manager Doc McGhee is complete BS because, “Doc would never come to a dump like this.”

In some ways, The Dirt is refreshingly honest. It doesn’t take itself too seriously, and the band acknowledges that, for the most part, they were a bunch of idiots. At other times, though, it glosses over things that could make it a stronger, more meaningful film.
Read more »
Posted by Fred Phillips at 8:51 AM No comments:

This one was brutal. Easily the toughest I’ve done so far because so many songs are on the same level in my mind. I basically want to hear the first four albums in their entirety, plus a few from later records. I could cheat and do a few medleys, but I didn’t.

Read more »
Posted by Fred Phillips at 2:03 PM No comments: