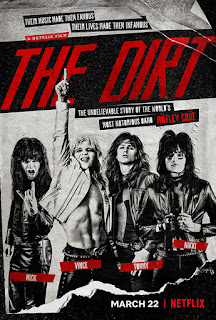 The Dirt delivers exactly what you’d expect in a biopic of Motley Crue – a trashy, but fun tale of debauchery that turns dark but never quite faces its demons. Much like the band’s lyrics, the movie often skips over substance and tough topics in favor of more sex, drugs and rock ‘n’ roll.

I didn’t go into The Dirt expecting a factual, documentary-style account of Motley Crue’s rise and fall. It’s a movie. Some things will be dramatized, some facts will change and some things will be completely made up. The film even acknowledges this in an early aside to the camera from guitarist Mick Mars: He lets the audience know that the telling of how they met legendary manager Doc McGhee is complete BS because, “Doc would never come to a dump like this.”

In some ways, The Dirt is refreshingly honest. It doesn’t take itself too seriously, and the band acknowledges that, for the most part, they were a bunch of idiots. At other times, though, it glosses over things that could make it a stronger, more meaningful film.

For example, the movie pretty much gives Vince Neil a pass on the fatal accident that resulted in the death of Hanoi Rocks drummer Razzle. In reality, Vince was trashed, driving recklessly and way too fast. The Dirt treats it as though the singer was mildly buzzed and the accident came from a moment of distraction. It does acknowledge, indirectly from a scene of a news report, that he got a slap on the wrist for it, but the incident doesn’t really seem to have the impact on Vince or the story that it should.

Likewise, bassist Nikki Sixx’s near-fatal heroin overdose, which could have been a harrowing and pivotal scene in the movie, is treated fairly lightly, even turning the EMTs reviving him in the ambulance into a dark joke. The following scene, when he returns home from the hospital only to shoot up again is a little more effective, but it all just seems to move too quickly and easily.

The one place they do seem to get the drama right, though, is in the death of Neil’s daughter Skylar. It’s a gut-wrenching scene for any parent and puts a very human face on the singer who has, to that point, not been much more than a narcissistic ass. It also provides a rare somber moment during Motley Crue’s reunion, which is probably mostly creative license, but it works.

Then there’s the “they all lived happily ever after” ending, which is a complete fantasy. It ignores the fact that after the band reunited with Vince, drummer Tommy Lee left for a time. They even recorded an album, New Tattoo, with the late Randy Castillo (Ozzy Osbourne). Samantha Maloney (Hole) then filled in on tour when Castillo was too ill to play with Motley Crue. And, as we all know, they’re all still pretty much a mess.

On a personal note, I disliked the treatment of the John Corabi years. It’s very brief and paints the self-titled album as a disaster, which isn’t the case at all. Yes, the fans didn’t embrace it, but that doesn’t mean it should be dismissed the way it is here.

So, now I’ll take my grouchy old man hat off and look at the movie through the eyes of a 1980s rock fanatic – and through that lens, the movie is great. It really took me back in time, and I laughed long and hard reliving my early years and, honestly, one of my favorite eras in rock.

The actors that play Neil (Daniel Webber), Sixx (Douglas Booth), Lee (rapper Machine Gun Kelly) and Mars (Iwan Rheon) all do fantastic jobs. They clearly did their homework in watching old videos of the band and capturing their mannerisms perfectly. As someone who lived through the era of Motley Crue, even I could sometimes forget that these were actors playing the band I grew up on and not the guys themselves.

Rheon, known for portraying the sadistic Ramsay Bolton in Game of Thrones, turns in the performance of the film as Mars. He portrays the guitarist, the oldest and most reclusive member of Motley Crue, as a lovable grouch and the lone voice of what passes for sanity. Yes, the character of the movie is probably a more virtuous version than the real Mars, but you can’t help but like him and his quips are the highlights of the dialogue.

The Dirt is certainly a flawed movie with its missed opportunities for drama and any sort of introspection. That said, it’s still a fantastically fun romp through one of rock ‘n’ roll’s most decadent decades – and in the end, I suppose that’s appropriate for a film about Motley Crue.

Posted by Fred Phillips at 8:51 AM