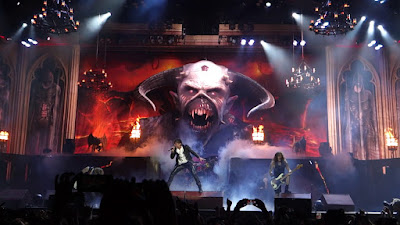 I waited 35 years for this – since the first time I heard Number of the Beast (admittedly, a couple of years after its release) – but the biggest remaining band on my bucket list has been checked off.

One of the regrets of my teenage years has always been missing a 1980s show in my area that featured both Iron Maiden and Judas Priest. It was a mid-week concert during the school year, and I would have been hard-pressed to get my parents’ OK, so I didn’t try. As the years passed, I still had not seen either band for various reasons, and that decision loomed large. It was a long shot, but it would have been a shot.

I took care of Judas Priest, hitting a couple of shows over the past two years, and I vowed that I would not miss the next Iron Maiden concert within a reasonable drive. When tickets went on sale for the Dallas date last November, I was waiting to be sure that I got good seats. So even after having tickets in hand, there was still about 10 months of anticipation before I finally entered the Dos Equis Pavilion for that final payoff.
Read more »
Posted by Fred Phillips at 8:25 AM No comments: