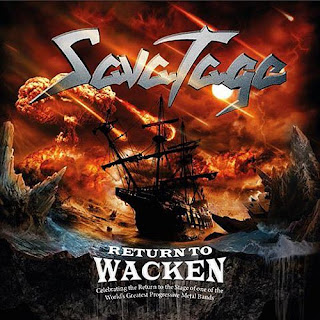 As Savatage prepares to take the stage for the first time since 2001 today at Germany’s Wacken Open Air Festival, I finally received my copy of their latest release, Return to Wacken.

First off, I’ve got to say that I should have done my homework on this before paying the import price. The title of the album is a bit misleading. I was expecting, perhaps, some live performances from the band’s previous appearances at Wacken. Instead, we have studio versions of songs that the band has performed at Wacken. It’s a bit disappointing to pay a premium for songs I already have, but that said, it’s still a pretty nice collection, if a bit heavy on their later work.

Return to Wacken opens with three bonafide classics for Savatage fans – “Hall of the Mountain King,” “Gutter Ballet” and “Believe.”
Read more »
Posted by Fred Phillips at 3:26 PM No comments: