By all accounts the movie stinks, but for metalheads, the soundtrack is worth the price of admission.

"Alone in the Dark" is the first big Hollywood production to boast an all extreme metal soundtrack, and this is no collection of throwaway tracks. It's got some of the heaviest hitters in the business.

If you're looking for an introduction to the metal world, this two-disc set is your best bet. It covers all the bases from the goth metal of Lacuna Coil and Nightwish to the classic thrash of Death Angel and Exodus, the Gothenburg style of In Flames and Dark Tranquillity, the hardcore of Agnostic Front, the black metal of Dimmu Borgir and Cradle of Filth, the stoner rock of Fireball Ministry and the experimental metal of Meshuggah and Mnemic.

The album takes a look back at some of the best releases of the past couple of years. High points include tracks from Fear Factory ("Cyberwaste"), Machine Head ("Imperium"), Diecast ("Medieval"), Shadows Fall ("What Drives the Weak"), God Forbid ("Gone Forever") and Arch Enemy ("Dead Eyes See No Future").

The album also offers fans a preview of Soilwork's latest album, due in early March, with the title track "Stabbing the Drama." (Take my word for it, the new Soilwork is killer. Watch for my review in a couple of weeks.)

The bottom line on this soundtrack is that if you like metal, there's something here for you.

Get "Alone in the Dark."
Posted by Fred Phillips at 7:12 PM No comments: 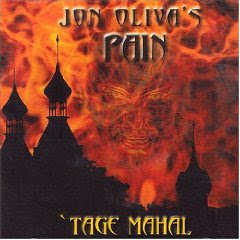 For an old Savatage fan like me, it's an embarrassment of riches - a new Trans-Siberian Orchestra album for the holidays, followed by an album from Jon Oliva's new project (not to mention another TSO album promised in the coming year.)

The debut from Oliva's Pain is practically a chronicle of Savatage's progression from the power metal band of the early 1980s to the symphonic metal experience of their more recent music. Each song on the album seems to fit a specific era in the evolution of 'Tage. The point is driven home on "People Say - Give Me Some Hell,"in which Oliva tosses off Savatage titles and lyrics with every breath, and seems to be having great fun doing it.

That's not to say these are throwaway 'Tage songs - far from it, despite the album's title. In some instances they're just a little outside the Savatage sound, like the jazzy strains of the intro to "The Dark" or the blues-influenced riffs of "Outside the Door." Other songs would have been right at home on Savatage albums. One of the album's best moments, "The Non-Sensible Ravings of the Lunatic Mind" would have been a welcome addition to the "Gutter Ballet" album, while "Walk Alone" will likely remind fans of the classic concept album "Streets."

In the end, Oliva's Pain comes a lot closer to reaching the musical level of Savatage than some of his previous side projects. It's always great to hear new music by the Mountain King, but what I really want to hear is a new Savatage album. Four years is too long to wait.