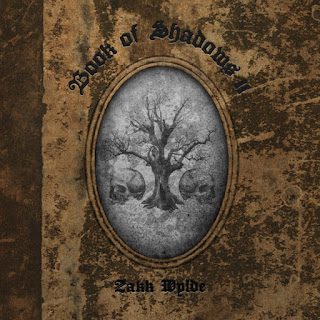 Great records are created by a certain set of circumstances that are nearly impossible to replicate later. That’s why sequels are generally a bad idea. If the reunited Guns ‘n’ Roses, for example, were to decide to record Appetite for Destruction II, it would create an expectation among fans that there’s no possible way the band could meet.

Zakk Wylde’s Book of Shadows isn’t exactly the landmark album that Appetite for Destruction was, but it was still a great record that showcased a surprising side of Wylde that we’d not seen to that point. In the 20 years since its release, we’ve heard a lot of acoustic music — both great and not-so-great — from Wylde. It’s hard for this record to have the same impact that one did, and it doesn’t for me.

All of that out of the way, Book of Shadows II is, for the most part, a good album. I’m just not hearing songs on this one that are as memorable as “Sold My Soul” or “Between Heaven and Hell,” and that’s what I was looking for from this record.
Read more »
Posted by Fred Phillips at 12:35 PM No comments:

Stuck in my Head: Flotsam and Jetsam, "Iron Maiden"


I’ve been a huge fan of Flotsam and Jetsam’s last couple of records. They’re probably one of the more underrated thrash bands of that genre’s classic era, and I thought they found their way again on 2010’s The Cold and 2012’s Ugly Noise.

“Iron Maiden,” the first single off their upcoming eponymous album presents a serious shifting of gears from those two records.

Read more »
Posted by Fred Phillips at 7:59 AM No comments: