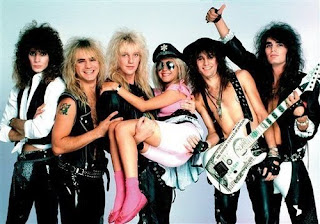 When it comes to 1980s "hair bands," few have suffered more barbs than Warrant.

The band that sold seven million albums in the late '80s and early '90s somehow became the punchline of a joke during the grunge era. Even today, magazines and television point to the band as one of the key factors in the end of rock's era of excess.

But bassist and founding member Jerry Dixon says the band subscribes to the theory that there's no such thing as bad press. He says they don't take the taunts and jokes personally, and they're happy as long as people are talking about them.

"Somebody has to take the blame, but it's all good," says Dixon. "You've got to have a thick skin in this business to be around this long. You can't get bummed out over something like that."

Dixon admits that the band's current image likely stems from some of the moves they made early in their career. He points out the infamous boy band-like matching white suits from the "Heaven" video as a perfect example. He says they were hungry to succeed and willing to do just about anything.

"I think we made some stupid moves and bad decisions, maybe, in some of our videos," he says. "At that point, we were so young. You'd like to think you were in control of your career, but in reality, you're 19 years old. I mean, I couldn't even drink alcohol yet. We left ourselves wide open for a lot of that, but we did our best."

Despite the scorn thrown their way in recent years, Warrant has managed to survive into the new millennium. They pull into the Monroe Civic Center on Thursday on the Metal Edge Rock Fest tour with fellow '80s acts Dokken, Ratt, L.A. Guns and Firehouse. It's a tour that might have had ego problems back in the heyday of those bands, but Dixon says they've all grown up now.

"There's been a lot of camaraderie," says Dixon. "We're all grown up and past that. It's fun to fight with other bands when you're just coming out - lip off a little bit, get in some barroom fights. After a while, we realized we're just happy to be doing this, and you get respect for other bands that have been around as long as us."

Dixon says the shows are drawing good crowds, and he sees a renewed interest in Warrant's brand of music. He says it might have something to do with the times.

"I think there is so much heavy stuff going on in the world, and people remember our era of music as good times, good shows and just kind of a night out on the town," he says. "I think with all of the stuff going on, people just want to go out and have fun. They don't want to go to a show and hear things that are too heavy and too close to home."

Whatever the case, Dixon says the band is getting a huge response when they crank out hits like "Cherry Pie" and "Uncle Tom's Cabin." That's not to say they don't get a little tired of those songs.

"I hate when bands do interviews and say `we still love to play that song,'" Dixon says with a laugh. "It gets repetitious, but at the same time, it's a double-edged sword. You're so glad to have that song because if it wasn't for those songs like `Heaven,' we wouldn't be here."

But when the crowd explodes with the opening riff of "Down Boys" or "Cherry Pie," Dixon says it's all worth it.

"I think the crowd reaction to those songs is so much more intense that it balances the excitement out on stage for us," he says.

And for the fans that don't get enough of Dixon on stage, he also has his own soap. Each heart-shaped bar from Soap Grooves contains one of Dixon's guitar picks. He laughs as he talks about it.

"Somebody had contacted me from soapgrooves.com; it's a Web site that makes these crazy soaps with dollheads - kind of rock `n' roll stuff," he says. "I sent them some picks, and they sent this soap back. I thought it was hilarious, so I put it on my Web site. I thought if somebody wanted a pick, it would be a cool way to get a pick."

As for Warrant, they hope to get into the studio once this tour is over and work on a new album.

"I'd like to put out a good product and go out and hopefully just keep touring," he says. "There's hope that we can really be around for a long time. So we're just trying to keep the wheels on, keep everyone sane and straight and keep it going."
Posted by Fred Phillips at 8:02 PM No comments: 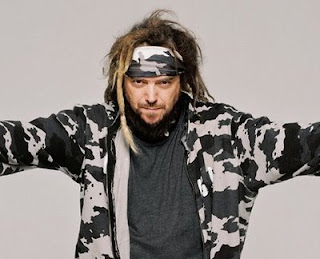 Soulfly's Max Cavalera has gone through quite a transformation over the past decade and a half.

The Brazilian-born vocalist and guitarist began his career in the mid-1980s in the thrash outfit Sepultura. By the time he split with them in 1996 to form his current band, he had fallen in love with the native instruments and sounds of his homeland and begun to integrate them into his music.

"In the beginning, Sepultura was a cheap imitation of Slayer and Venom," Cavalera says. "You can only do that so long before it becomes obvious that you're a follower. When Sepultura started finding our own sound, we became leaders. That's what I want to do with Soulfly. We don't want to follow anyone else's path."

Cavalera says Soulfly's tribal sound and spiritual themes are unique in the world of metal. His journey down the new path began when he bought a berimbau almost a decade ago in Brazil. The instrument, which resembles a bow-and-arrow with a coconut attached to it, became a regular part of his live performances.

"It's very primitive, very unique sounding," Cavalera says. "I started playing them and adding them to my music, and the next thing I knew it became a trademark."

The sound also stems from Cavalera's love of percussion and tribal drumbeats. For the band's three albums, he's recruited percussionists who have worked with jazz and reggae greats like Sergio Mendes and Bob Marley. The drums have also become a highlight of the live show, with a drum jam that often features guests from other bands Soulfly tours with. Currently, drummer Dave Lombardo, of legendary thrash band Slayer, joins the jam.

"If you've never seen Soulfly, you're going to be blown away at that moment of the show," Cavalera says. "There are no guitars; there are no vocals. We let the drums do the talking, and it's very powerful."

The current Soulfly tour with Slayer is in support of their latest album, simply titled "3." It blends the aggressive metal of their self-titled debut with the more melodic sounds of their second album "Primitive." Cavalera, who also makes his debut as a producer on "3," says the mix wasn't intentional, but he's happy with the way it turned out.

"That's just the chemistry of Soulfly," he says. "We decided to let those two things come together, so the mix of melodic and heavy goes hand-in-hand throughout the album. I think, in a way, that's the power of the Soulfly music. It's the chemistry we've found in the band."

But there are also some quieter moments on the album that have much more to do with Cavalera's spiritual journey and the music of his homeland than with metal. He says he listens to a variety of music and wants to offer a bit of that to his fans.

Arguably the moment that speaks loudest on this album, though, doesn't feature any music at all. Sandwiched between two of the most aggressive songs on the album is the track "9-11-01," Cavalera's tribute to the victims of last September's terrorist attacks. When other artists are trying to put their feelings into words, Cavalera, who has made his home in the United States for more than a decade, instead opted for 60 seconds of complete silence.

"I wanted to put the sorrow of the victims and their families in a way that no one has put it before," he says. "I saw many artists do shows and benefits or write songs about it. I decided to do the opposite - to not talk about it at all, but let the minute of silence be louder than a thousand words."

Though Cavalera is pleased with the new album, he considers his music a spiritual experience - one that can best be appreciated live.

"You've got to be there in body because there's something that happens," he says. "It's a mystic force that works through the music, and you have to physically be there and be touched by the music live. No other way will you feel Soulfly's impact."

From spirituality to perseverance, Soulfly's music carries a lot of messages, but Cavalera says the biggest one - and the one he most wants fans to understand - is strength.

"If you don't have strength, what can you do?" he says. "There's a spiritual strength behind Soulfly's music. It's the strength to keep up against all odds, no matter what. It's important to believe and have strength."
Posted by Fred Phillips at 5:34 PM No comments: