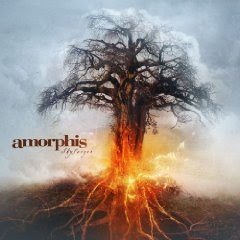 I discovered the Finnish folk/progressive outfit with their 1996 record "Elegy," and quickly went back to pick up 1994's "Tales from the Thousand Lakes." Their output for the next eight years, though, was somewhat disappointing as the band moved toward a mellower, more experimental sound. In 2006, they began a surprising comeback with the addition of new vocalist Tomi Joutsen. The music began to get heavier again, and the punctuating death growls of "Elegy" started to creep back in. The trend continues on the band's third record with Joutsen.

"Skyforger" returns to a source that's been a goldmine for the band over the years -- Finnish literature. The songs on the record tell several scenes from the "Kalevela" from various characters' viewpoint. The opening track "Sampo" gives a good overview of what listeners can expect from this record. It opens with an upbeat piano run that's joined quickly by a harmonizing guitar riff that builds to a fairly aggressive vocal delivery from Joutsen. The chorus is melodic and memorable, and after a brief, soft interlude, the band gives us a heavier piece in the middle that sees the first (but certainly not the last) hint of the growled vocals on the record. It gets "Skyforger" off to a very good start.

That's followed by the first single, "Silver Bride." It's an energetic number with a more upbeat and straight-ahead rock approach. It lacks many of the subtleties of the opening track, but it's still solid, with another memorable chorus -- really what you'd expect from a first single. "From the Heaven of My Heart" returns things to the folk sounds, and has a real "Elegy" feel to it. There's an almost commercial turn on "Sky is Mine," which opens with an undeniable guitar riff that may be one of the happiest-sounding pieces I've ever heard from Amorphis. The whole song is high-energy and upbeat, almost to the point that you're thinking they're looking for a mainstream hit. That notion is quickly put to rest with the appropriately named "Majestic Beast" that follows. It is indeed an epic, snarling beast of a song with some overtones of Opeth's heavier material. It's one of the many highlights of the record.

One of the things that Amorphis did in their experimental period was to play around with non-traditional metal instruments, and they continue to do that here. The mournful flute (at least I think it's a flute, I apologize for not being up on my woodwinds) at the beginning of "Highest Star" is a great touch and a nice contrast with the heavier chorus of the song.

If there's a song on the record that is one of those roll down the windows and head out on the highway numbers, it's the title track. It opens with a jaunty acoustic piece featuring more woodwind sounds and traditional instrumentation before transitioning into a heavy chorus that builds and builds to the deathly growls on the end.

The record closes just as it opened with one of the strongest numbers, "From Earth I Rose." It's another high energy number that perfectly blends heaviness with melody and brings together all of the elements that have come before. The folk melodies and instrumentation, aggressive sounds that rub elbows with death metal and a huge, memorable chorus. It brings the record full circle.

"Skyforger" brings to fruition a promise that the band made with "Eclipse" three years ago, a return to the more metallic sounds of the past, while taking elements from the experimentation of the middle years to augment that sound. It's easily the band's best work since "Elegy" and, quite possibly, its equal.