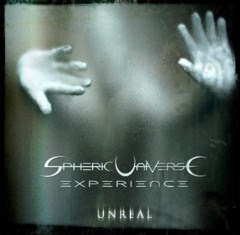 To tell you the truth, I’ve been just about “progged” out in recent years. I’ve reviewed stacks and stacks of predictable prog, but just when I get to the point where I groan when I pull a new one out, I find a record that renews my hope in the search. The latest from Spheric Universe Experience is that record.

Is it incredibly original and mind-boggling? Not really. But it is incredibly well-done, a collection of tight songs with the focus on the song rather than on the abilities of the musicians.

“Unreal” is full of high energy tracks, and the opener “White Willow” sets the tone with an interesting organ riff on the opening, moving to a more aggressive, almost thrash bit, and then a power-metallish chorus. While the song (and the record) is loaded with Dream Theater influence, as are most prog metal acts these days, it’s not copycat. They continue with the unusual instrumentation on “Down Memory Lane,” which opens with a sitar riff, followed by an exotic-sounding melody before the heavier bits kick in on the verse. “3rd Type” opens with a Rush-like synth line before moving into a very nice piece with some spacy keyboards and a chunky guitar riff about 35 seconds in.

There’s a break with the fourth tune, “Near Death Experience,” a haunting piano interlude with no metallic instruments at all. There’s a nice flourish at the end that leads into a heavy, solemn opening riff of “Lost Ghost.” Admitttedly, toward the middle of the record, the band begins drifting more toward the standard prog sound, but there are a few more surprises up their sleeves, like the heavy Sabbath-style riffing of the album closer “Tomorrow,” or my personal favorite track on the record “O.B.E.” It’s an instrumental that opens with some impressive guitar riffing, then shifts gears into a nice little funky piece that is fantastic. It’s sort of like a metallized version of a James Brown tune.

The band is solid and tight, with all members putting in impressive showings without being overbearing. There’s a nice balance between musicianship and songwriting. The lyrics could use a little work in places, particularly third track “Lakeside Park,” but that’s a minor criticism.

The songs are solid, the album sounds good, and Spheric Universe Experience throws just enough unusual bits into the mix to keep things interesting. It’s a good listen for those who like song-based progressive stylings.

Posted by Fred Phillips at 8:35 PM