Review: The Fallen Within, "Intoxicated" 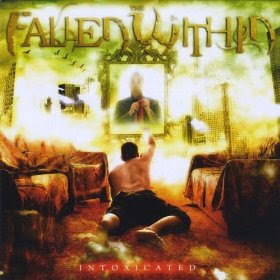 While The Fallen Within’s debut comes with the melodic death tag, but it’s certainly much more to the melodic side of the coin than the death side. The band obviously takes its cues from two of the giants of that genre, In Flames and Soilwork, but generally speaking, there are far lighter moments than you’d find on most melodeath outings.

Sure, there are some straight up pieces of In Flames worship, like “Extinction,” but more often than not, The Fallen Within brings just a little bit of their own flavor to the table. No one will use the term originality when describing this album, but for the most part it’s well-played and at least interesting.

After wasting the listener’s time with the lead-in “My Vanity,” which really adds nothing to the record, they launch into “Sound of Destruction” which mixes their Soilwork fetish with some more progressive leanings and a touch of metalcore. It’s not a bad start. Unfortunately, the band does like to waste the listener’s time. They do it again at the end with “Timeworn” and its music-box opening and trippy keys that go nowhere. They also do it at the beginning of the title track, which actually turns out to be one of the better tunes here. It opens with some electronic noises that, at times sound – I don’t know any other way to say it – farty. They should have just started with the rip-your-face-off Soilwork-flavored blast that comes after the intro. That part of the song reminds me a bit of “The Pittsburgh Syndrome” from Soilwork’s Sworn to a Great Divide.

Often, The Fallen Within venture into a more mainstream sound, but that’s not necessarily a bad thing. After an In Flames-inspired opening, “Endless Reality” morphs into a mellower tune, with aggression clearly an afterthought, but it works. I particularly like the piano line running under the surface of the song – a nice alternative to the more synthesized-sounding keys that usually come with the genre. “I Am Hate” features a more commercial bounce on the verse, but has a nice heavy screaming chorus. It doesn’t always work, though. “Last Breath” opens with a traditional-flavored riff that’s one of the more memorable on the record, but then becomes much more of a metalcore tune than melodic death.

In the end, Intoxicated is a competently played and somewhat entertaining blend that will likely entertain fans of Soilwork and In Flames for at least a short while. I enjoyed the record while it was playing, but I’m not sure I’ll remember it at the end of the year, particularly with new releases likely coming from both of their major influences.

Posted by Fred Phillips at 6:57 PM