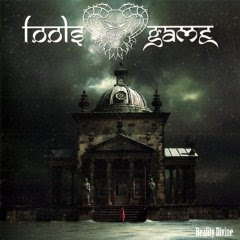 The debut record from Fool’s Game is a promising collection of melodic metal tunes, if at times frustrating. The clear strength of the record is in the guitar work of Matt Crooks and Matt Johnsen of Pharoah fame. The six-string mastery is the foundation that the band is built on and is solid enough to cover up the record’s biggest weakness, the vocals of Lars Larsen.

The songs here draw on influence from some of the biggest forces in the melodic and power genres. The material seems to be heavily shaped by Blind Guardian, but you’ll also hear nods to Savatage, Nevermore and other bands.

Reality Divine blasts into action with opening cut “Mass Psychosis,” which showcases the guitar work with some impressive lead and nice riffing. Larsen’s vocals hover somewhere between Zachary Stevens and Matt Barlow, but with notable weaknesses. There are occasional notes that just sound off and his “death growl” is almost painful. He’s in better territory on “When the Beginning Meets the End,” with a Hansi Kursch-like delivery. There’s a cool 1970s prog synth line at the beginning and some nice atmospherics lurking just below the surface of the song.

The vocals and the record reach a low-point on “As the Field of Dreams was Abandoned,” where the early vocals are really bad and then Larsen attempts to do more than he’s capable of on the chorus. Fortunately, it’s the only real mess here, and is quickly made up for with the next track.

Perhaps the highlight of the records is “The Conqueror Worm,” featuring a vocal appearance by Tim Aymar of Control Denied and Pharoah. There’s a cool, funky opening, and some of the best guitar work on a record that’s impressive in that area. The vocals are steadier here than on any other track, and while it doesn’t quite achieve the epic feel that it’s going for, it’s still a great tune. There’s a nod to thrash on the opening of “Sowing Dead Seeds,” but it doesn’t stay in that territory long. It moves into a sort of dreamy power ballad and settles back into prog-power mode.

Much of the record, though, is up and down, blending some impressive bits with a few blahs. “She Moved Through the Fair,” for example, has some outstanding riffing early, but the verse is a power metal number that we’ve heard countless times. The intro to that song, however, is solid with a dark pianos and big, dramatic blasts of power a la Savatage. “The Wild Swans at Coole” isn’t bad, but doesn’t really have anything to recommend it, either. Album closer “On Endless Plains of Ignorance” features a catchy riff and lead, but I’m not sure I’ll remember much about it.

Reality Divine does offer quite a bit of promise. It’s an entertaining, occasionally impressive, record from a band that, musically, seems to have unlimited potential. I’ll be interested to see what they do in the future.

This review was originally published at Teeth of the Divine.
Posted by Fred Phillips at 10:11 AM