Review: Living Colour, "The Chair in the Doorway" 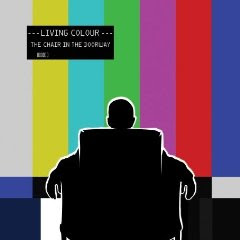 The first few weeks of January are always slow in the music world. The year-end lists are done for the previous year, the records for this year haven’t really started hitting yet. So it’s always a good time for me to look back at some albums that I didn’t get to spend quite enough time with last year. One of those, unfortunately, was Living Colour’s “The Chair in the Doorway,” released in September.

When their hit “Cult of Personality” rocked the hard music landscape in the late 1980s, the band actually, I believe, was short changed. Quite a bit was made of their being an all-black hard rock act in an age when that was rare, and in a way, I think it turned them into a bit of a novelty act. That’s a shame. What Living Colour should be remembered for is not their race, but rather the injection of funk and soul that they put into harder music. “Vivid” and “Time’s Up” are perhaps two of the most creative records to come out of that era of hard rock, and the darker “Stain,” released a little later, was solid in its own right. Their output since then, as a band and as individual performers, has been spotty. “The Chair in the Doorway,” though, may be enough to put me back into the fan fold.

Those who remember the neon-wearing, bombastic act of the 1980s singing about “Glamour Boys” might be a little surprised by this record, but then again, maybe not. There was always a more serious side to the band, and it’s on full display here, but never too heavy-handed. It’s also a more mature band, obviously, and that’s apparent in both the subject matter and the arrangements.

The record opens on a strong note with the energetic “Burned Bridges,” which begins with a hip-hop influenced beat and delivers the first memorable chorus of the outing. Not surprisingly, though, I find myself drawn to the heavier, gnarlier tunes on the record, and there are several good ones. “The Chair” opens with some of guitarist Vernon Reid’s patented noise licks and features a grinding riff and an aggressive vocal delivery from Corey Glover. It’s perhaps one of the heavier moments in the Living Colour catalog. But it’s topped quickly by the next tune, “Decadance.” The song has a relentless guitar riff and another top-notch showing from Glover. “Out of My Mind” delivers a huge, funky hard rock riff to open, one of the most memorable on the record. Then it slips into a down-and-dirty chunky riff with Glover delivering a snarl that we’ve never really heard out of him before. It’s easily one of the strongest performances here, and perhaps in the history of Living Colour – gritty, yet still grooving.

There are less intense moments on the record that are equally entertaining. “Bless Those (Little Annie’s Prayer)” features a heavy blues and gospel influence. It’s funky and fun with some cool slide riffing from Reid and a few nice slap-and-pop bass licks from Doug Wimbish. It’s another of my favorites on the album. “Young Man” delivers a more modern sound with shades of the White Stripes. It’s quite catchy and very memorable. “Method” brings another hip-hop influence on the opening, but then turns a bit spooky, artsy and exotic with a heavy synth line. “Not Tomorrow” displays a trippy, psychedelia-influenced feel with some tasteful guitar work from Reid. The Hendrix comparison is obvious, but also appropriate. “Behind the Sun” brings a happy, sunny guitar riff and one of the more upbeat numbers, similar to something you might hear on “Vivid” or “Time’s Up,” and the hidden bonus track (with a title that I can’t print here) is a fun, tongue-in-cheek number that will recall some of the band’s lighter fare, like the aforementioned “Glamour Boys.”

There are only a couple of songs on the record that miss the mark, and they don’t miss by much. The musicianship is superb, and the band is tight as ever. The songs are well-written and memorable, and on “The Chair in the Doorway,” Living Colour sounds like a band re-energized and re-dedicated. If you’ve wandered away from their music over the years, it’s a good opportunity to rediscover what you liked about them in the first place.

Get "The Chair in the Doorway."