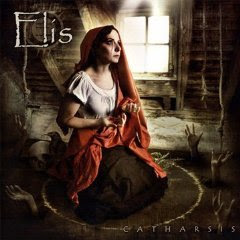 Any package that includes releases from Napalm Records always gives me mixed feelings. On the one hand, I’m pretty sure that I’ll enjoy most of them, on the other, I know I’ll have to deal with voiceovers on at least half the songs. (Come on, guys, the watermark is sufficient for most everyone these days). It’s particularly frustrating on a record I really like, such as Elis’ Catharsis.

Billed as gothic metal, there’s much more to the sound of Elis than just goth, as we hear as early as the opening track “Core of Life.” It’s an excellent introduction to the band’s style, as it opens with the expected gothic stylings, but then moves into somewhat heavier territory than most of their goth brethren. By the time second track “Twinkling Shadow” begins, I’m already hooked. It ups the ante with some nicely done “beauty and the beast”-style vocals, which I’ve always been a sucker for. Bassist Tom Saxer provides the death counterpoint to Sandra Schleret’s angelic tones. There’s even a nice death-flavored break toward the middle of the song, where Saxer takes the mic for himself. The approach works a little less well on third track “Warrior’s Tale,” which features guest vocals from End of Green’s Michelle Darkness, whose Peter Steele-meets-Dracula vocals don’t work quite as well for me as Saxer’s growls. It’s still an enjoyable number, though.

After that, it settles into more of what you’d expect for a while. “Des Lebens Traum – Des Traumes Leben adds an interesting medieval/folk melody line to the mix. The upbeat and happy-sounding “I Come Undone” opens with a straight up hard rock sound with driving bass line and sunny guitars. A little power metal creeps in on “Firefly” and returns on record closer “The Dark Bridge.”

The next real surprise, though, comes with the seventh song, “Morning Star.” One of the heavier songs on the record, it features a mechanical galloping riff with Saxer taking over the vocals again for long stretches. It’s one of my favorite pieces on Catharsis. On “Das Kleine Ungeheuer,” it’s not the snarls of Saxer that counter Schleret’s soprano, but the slabby guitar riffs of Pete Streit and Chris Gruber. A few folk elements creep back into the melody on this track with the music box sounds in the background. Finally, “Rainbow” offers the slower highlight of the album with some nice acoustic guitar work and exotic percussion from Max Nascher underneath. It reminds me a little of the Sabbath classic “Planet Caravan.”

I think I may have reviewed one of Elis’ previous albums back in the Digital Metal days, but I’m not sure. If so, it certainly didn’t have the impact on me that this one did. Catharsis has everything I look for in a female-fronted goth metal act. There’s a heavier edge to much of the music, and Schleret’s soprano, while occasionally over the top, is confident and strong, never veering into that annoying look-at-the-notes-I-can-hit style that often comes with the territory.
Though technically a 2009 release, Catharsis makes a great start to 2010.

Posted by Fred Phillips at 7:03 PM