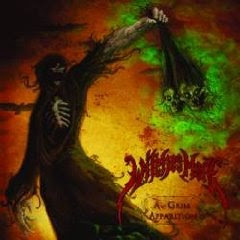 In all honesty, when I think of Austin, Texas, power metal isn’t the first thing that comes to mind. Witches Mark, apparently, is making a valiant attempt to change that.

This four-song EP doesn’t convince me that can happen, but it’s also not a bad set of songs either. In fact, if I didn’t know better, I’d guess that this was a European band. Even vocalist Michael Lance has a few inflections that suggest the European movement.

The record starts with promise on a blazing straight power metal number, “Salem’s Fire.” It doesn’t bring anything new to the table, but it’s tight and well done. It was definitely enough to capture my attention. The sound becomes a bit more ambitious on “Cauldron Born,” which opens with a thrashy guitar riff before moving to some harmonized vocals that are reminiscent of Blind Guardian. There’s also a bit of Iron Maiden-inspired sound right before the chorus.

The other two tracks are a bit on the slower side, but still interesting. “Ethereal” again brings the Blind Guardian influence, but goes for a more atmospheric sound. Lance’s vocals sound a bit like Dee Snider at times, but not in a bad way, and there are a few moments that almost approach a folk metal approach. The title track, which closes the EP, is probably the weakest effort here, but has the potential to be the strongest. There’s a nice marching guitar riff from Robert Williams and Robb Bockman to open, but I wish the guitar sound had just a little more oomph. The vocal performance here is again harmonized, but it’s a bit buried, muddied and rough at times. To be fair, the version of this song that I was given says it’s a demo version, and it certainly lacks in sound quality when placed next to the other three. Perhaps its better in the final format.

A Grim Apparition is rough in places, but there is some promise here, too. I’m not ready to say they can earn a spot in the upper echelon of American power metal acts, but I will listen with interest to what they do in the future.

Get "A Grim Apparition."
Posted by Fred Phillips at 10:37 PM