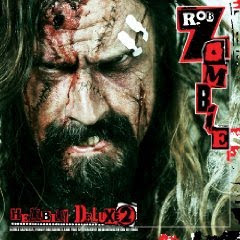 Surprisingly, the biggest thing working against the latest release from Rob Zombie is its title: "Hellbilly Deluxe 2."

I always think it’s a bad idea for a band to go back in its catalog to a fan favorite and try to do a sequel. Years have passed. It’s not the same band. It won’t recapture the magic of the original record, and therefore creates an expectation that the new record can’t possibly meet. That’s the case here.

It’s understandable that after largely ignoring music for the past decade to work on horror movies and delivering a stinker (“Educated Horses”) last time out, Zombie would want to send the message to fans that he was going back to his roots. The problem is that the original “Hellbilly Deluxe” was easily the pinnacle of his post-White Zombie solo career. This record, while quite good, doesn’t even come close.

Zombie does return to roots here in a way. He’s back to dishing the campy, tongue-in-cheek B-horror subject matter that made him famous, as you can see with just a look at the song titles, but musically, despite some nods to his past, it’s a different animal. Not necessarily bad, but different.

There’s no doubt why second track, “Sick Bubblegum” was chosen as the lead single from this record, since it’s the closest thing here to a song from the original record. It’s a catchy, upbeat number that’s entertaining and memorable, despite the fact that it sounds a bit like he ran out of lyrical ideas on the bridge. It gets the album off to a good start following the White Zombie-flavored opener “Jesus Frankenstein.”

The goodwill he creates with those songs, though, nearly goes out the window with the bouncy, ultra-happy sound of “What,” where he uses the overly synthesized vocals which have never made any sense to me, as Zombie’s natural voice is perfect for the horror-show sound. He returns to that style on “Dream Factory,” perhaps the weakest number to be found here.

One of the more surprising aspects of this record is that, in most cases, Zombie is not the true star. Rather it’s the fretwork of guitarist John 5 that often steals the show. The first example is the western-flavored acoustic opening of “Mars Needs Women.” It’s an unusual piece for a Rob Zombie record, and it’s almost a letdown when the bludgeoning drum beat and Zombie’s shouts start, destroying any trace of subtlety the opening guitar created. John 5 takes center stage again on my personal favorite “Werewolf, Baby,” where he delivers some tasty blues-rock flavored slide guitar. The song finds Zombie working out his Alice Cooper fetish again on the verse, while the chorus takes on a surprising classic Aerosmith feel. His presence is felt again on the opening of “Cease to Exist,” as a smooth acoustic lick leads into a slow groove. It’s one of the more interesting pieces on the record, part White Zombie, part Alice Cooper, part Pink Floyd, part modern rock and part new wave. It’s not necessarily the best song here, but probably the most creative.

Some of the better moments are where he dips back to the White Zombie sound, as on “Burn,” which features a beatbox gone horribly wrong – but in a good way. The Munsters-meets-surf-rock sound of “Werewolf Women of the SS” is also great fun. When listening to that main riff (there’s John 5 again), you can almost see Herman Munster rolling down the road in his converted hearse.

Zombie turns to his horror-movie career to close out the record with “The Man Who Laughs.” It opens with a shrieking violin piece that would fit right in any horror movie soundtrack then introduces an interesting blend when a straight-up hard rock riff is laid on top of it. I could, to be honest, live without the extended drum solo, which, to me, interrupts the song more than it adds to it. Then again, I’m a guitar guy, so what do I know about drums?

Despite the title, “Hellbilly Deluxe 2” it’s not, nor did I expect that to be the case. It is, however, easily the best thing Zombie’s done since that record and well worth checking out for folks that may have given up on him.