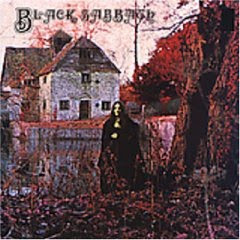 This week marks the 40th birthday of the genesis of my favorite form of music. It’s hard to believe that metal’s been with us that long (of course, it’s also hard to believe that I’ve been around almost that long.) It was Feb. 13, 1970, when the first true heavy metal record was released, Black Sabbath’s self-titled debut.


Sure, there were bands that showed elements of the style before the release of “Black Sabbath.” Arguments are often made for Led Zeppelin, Blue Cheer, Vanilla Fudge, Steppenwolf, even Jimi Hendrix or Cream. No doubt, those bands laid the foundation metal was built on, but Sabbath was the first to completely bring it together.

It’s easy for me to forget just how good this record is. It sometimes gets lost behind other great Sabbath records like “Paranoid,” where every single song is a certified metal classic, and my personal favorite, “Sabotage,” which I consider their most underrated work. But listening to Ian Christe’s “Bloody Roots” radio show on XM radio Saturday, in which he paid homage to the record, it struck me again just what a defining moment the album was in rock.

It begins with the title track, “Black Sabbath.” Since the record was released nearly three years before I was born, I can’t say for sure, but I have to believe that the opening riff of this song signaled a shift in rock music for listeners hearing it for the first time. Those three simple single notes ring out like doom bells across a barren landscape, punctuated by an actual bell and Bill Ward’s pounding drums. It was quite like nothing else that the musical world had heard before. Ozzy Osbourne’s mocking voice then croons out dark lyrics about a figure in black before the whole band explodes into a galloping riff that’s the predecessor of bands like Judas Priest and Iron Maiden that later brought the style to more prominence. The song stands as a monumental moment in rock music, even today.

But most folks know that Sabbath didn’t start out as a metal band. They started as a cover and blues band called Earth, and the blues influence from those early years is in full effect on this record. That influence is first felt here on one of my all-time favorite Black Sabbath songs, “The Wizard,” which opens with a harmonica piece and really showcases some of Ward’s best drum licks. If not for the downtuned, distorted guitar from Tony Iommi, the song could easily be a blues number. The band also offers up a boogie piece in the opening of “Wicked World,” showcasing Ward again, which is followed by a heavy, but full of soul riff that certainly has a blues flavor. The blues influence, though, is perhaps most notably felt on the band’s cover of Aynsley Dunbar’s “Warning.” It’s a very faithful, practically note-for-note, interpretation of the song that gives Iommi a chance to show off some of the soulful licks that he used sparingly but effectively across the Sabbath catalog.

“Warning” is one of two covers on the record, a fact that many people aren’t aware of. The other is “Evil Woman,” originally done in a psychedelic version complete with a horn section by the band Crow. Again, it’s a fairly faithful cover, dropping the horns in favor of guitars, but keeping the groove with Geezer Butler’s thumping bass line.

When most people think of Black Sabbath, though, they think of the big slabalicious power chord riffs that Iommi pumped out over the first six records in their catalog. The birth of that sound is on this record as well, in the form of “NIB.” It opens with the Butler bass solo “Bassically,” a signature moment for the guy who, in my opinion, was the backbone of Sabbath. While Iommi’s huge riff powers the song, as with so many Sabbath tunes, it’s Butler’s bass that drives it, for the most part doubling Iommi’s riff, but adding some rhythmic embellishments of his own.

The only real weakness of the album has nothing to do with the music, but is the strange mash-up of songs on the U.S. edition of the album. “Wasp,” “Behind the Wall of Sleep,” “Bassically” and “NIB,” for example, are all packaged as one track on most editions of the record. Likewise for “Bit of Finger,” the dark acoustic number “Sleeping Village” and “Warning.” It can be frustrating when you want to listen to a particular song, and I’ve often wondered why it was done that way.

On another interesting note, “Wasp,” “Bassically” and “Bit of Finger,” all brief instrumental intros to the songs that follow, are not credited as full songs on the European editions, which properly split the songs. “Wicked World” was not included on the original European album, and “Evil Woman” was not included on the original U.S. version. They finally got it all together, along with some alternate versions and outtakes, on a European remaster released last year. Hopefully that version will see a U.S. release soon.

If it’s been a while since you listened to Black Sabbath’s debut, this week might be a good time to rediscover it. If you haven’t heard it before, go get it now. Even if you’re not a huge metal fan, you might be surprised at some of the things you find.

Posted by Fred Phillips at 4:01 PM