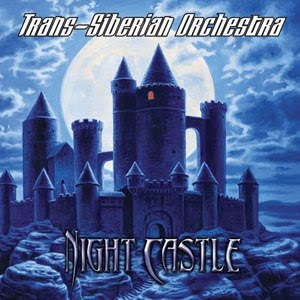 For the past five years, I've talked with either Trans-Siberian Orchestra founder Paul O'Neill or guitarist Al Pitrelli. Every year the story has been the same: "Night Castle" will be here in the spring or soon after. This year, I didn't have to ask the question. It finally arrived -- as a double album, no less -- and I can safely say that, while I don't want the next record to take quite as long, it was worth the wait.

As with all things TSO and Paul O'Neill, "Night Castle," through the first 21 songs, follows a fairly elaborate story line. I'll leave the finer details to the listener to discover, since that's part of the magic of a TSO record, but the story involves a seven-year-old girl who meets a strange man building a magical sandcastle on a beach and a U.S. Army lieutenant about to be deployed on a Special Forces mission to Cambodia who drunkenly stumbles into a magical castle of his own. The story visits a variety of times and places before it reaches its ultimate conclusion.

The music here is also as varied as you'd expect from a TSO record. There are some heavy operatic pieces, some of the band's patented blending of rock and classical pieces, and some straight up hard rockers.

The record opens big with "Night Enchanted," originally released as a single during the holidays last year. It's a magical piece that blends bits of Verdi and Delibes with some rock courtesy of O'Neill. A heavy vocal piece follows with "Childhood Dreams," which showcases the huge voice of Jay Pierce, who reminds me a bit of Guy LeMonnier, the original big voice from TSO's debut, "Christmas Eve and Other Stories." I'd love to hear him get a crack at "An Angel Came Down," but unfortunately, he's with the other troupe this year. He's not the only huge voice here, though, as fans will hear when Rob Evan gets cranked up for "There Was a Life." (Alas, he's also on the other leg of the tour.)

After two heavy classical pieces, the band throws a straight up hard rocker at us with "Sparks," which O'Neill tells me was originally from his Broadway show "Gutter Ballet," which hopefully will hit stages in the next couple of years. The show also provided some familiar Savatage tunes from the record of the same name and the "Streets" rock opera.

The title track brings the first appearance from another rock vocal icon, Jeff Scott Soto. It's an intense number that's very much in the vein of Savatage. Soto also turns in a stellar performance on the record's most metallic number, "Another Way You Can Die," which is a personal favorite of mine. He shows off his more operatic range on the moving "Time Floats On" on the second disc, as well. To be honest, this record gives me a new appreciation for Soto, and, luckily, he's on our leg of the tour.

"Tocatta - Carpimus Noctem" brings another top-notch blending of classical and rock, as the band takes on Bach. Mozart's in there, too, with "Mozart and Memories." Beethoven and Chopin get their turn at the TSO treatment to start the second disc with the frantic, mysterious and powerful "Moonlight and Madness." While all of the band's work is top notch, they truly shine on these instrumental blends, and the ones on "Night Castle" are no different. The story portion of the record ends on a reflective note with the acoustic instrumental piece "Embers."

The record closes with five pieces that pay tribute to some of O'Neill's influences, tip the hat to the past and look to the future. Most recognizable to TSO fans will be the band's dark take on Carl Orff's "Carmina Burana," which has been a fiery fixture in the live show for several years now. It loses a little power in the translation to record, but is still a solid performance. Another treat for Savatage fans comes in the cover of one of my favorite 'Tage tunes, "Believe" from the "Streets" record. This version is a little closer to the planned Broadway version of the song with soulful vocals from Tim Hockenberry (who also sings on "Sparks"). As much as I like this version, to be honest the Jon Oliva version will always be the version for me, though.

One of the group's more obvious influence comes to play on the cover of Emerson, Lake and Palmer's "Nutrocker." The rocked out take on Tchaikovsky's "Nutcracker" was obviously the prototype for much of what O'Neill and TSO have done, and it features a guest appearance by Greg Lake. There's another Delibes piece with "Child of the Night," which would fit well with the "Night Castle" story. The record ends with a look forward on the rocking instrumental "Tracers," written by O'Neill, Pitrelli and Pitrelli's wife, Jane Mangini. It's perhaps the most straightforward piece on the record, but that doesn't make it any less solid.

As always, O'Neill has rounded up an outstanding cast of singers and musicians for this record and worked it to as near perfection as you can get. It's often the case that double albums feature only really one good album's worth of songs, but "Night Castle" is a definite exception to that rule. I've only just gotten this record, and I can't wait to hear what the next one will sound like. (After we get a new Savatage record, of course ... hint, hint.)