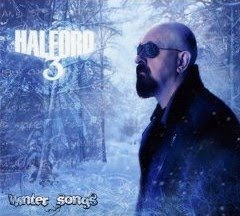 A Christmas record from Rob Halford?

Yes, that Rob Halford. The leather-clad screaming frontman of Judas Priest. Let’s just say that the third record with his eponymous Halford side project, “Winter Songs,” is … well, just a little different from the first two.

It doesn’t start out that way. The first single and opening track “Get Into the Spirit” is very much in the vein of Halford. There are, perhaps, some holiday-flavored lyrics, but the song is a roaring metal tune with Halford showing off his upper ranges, as usual. It’s not a bad song, but not very Christmassy either. From there, we get a mix of classic carols and original numbers that do ring a little more of the season.

One of the better songs on the record is the cover of “We Three Kings.” It’s an upbeat and rocking take on the song with just a little bit of the mystical. It’s by far my favorite on the record and is the only one here that will make my top 10 list of the best hard-rocking Christmas songs (coming tomorrow). But there are some almost equally entertaining numbers. “Oh Come, O Come Emanuel” features a nice, galloping guitar riff, but doesn’t work quite as well as “We Three Kings.” “Christmas for Everyone” and “I Don’t Care” are interesting in their old-school 1970s hard rock feel. The first reminds me a bit of classic Alice Cooper, without the creepiness, the second is less of a Christmas song and more of a rock ‘n’ roll song that just happens to be set around Christmas. Both are a lot of fun.

Halford also shows a surprisingly soft side on this record. He gives a very traditional treatment to “What Child is This?” It’s actually quite impressive and shows there’s more to Halford than a high-pitched howl. “Light of the World” shows off some Beatles-esque atmospherics in the softer moments, and the title track is a piano ballad with some Led Zeppelin overtones. It’s a really strange place for Halford. Sometimes it works (“What Child is This?”), sometimes not so much (“Winter Song”).

Of the remaining two songs, “Oh Holy Night,” is the better. It takes the traditional melody of the song and lays some crunchy rock guitars beneath it. It reminds me of something that Trans-Siberian Orchestra might do with the song. The album ends with a rendition of “O Come All Ye Faithful” which is way over-the-top and melodramatic, but at the same time very much in line with the traditional version.

I’m a collector of off-the-wall Christmas records, and I’ve got some pretty gnarly ones, but this one might be the strangest pairing of music and musician there. (Well, there is the death metal version of “Silent Night” by members of Testament and Anthrax, but that’s in its own league of weirdness.) Still, Halford does a surprisingly good job with it. I certainly don’t think this record is destined for the Bing Crosby treatment, with families listening to it by the fireplace on Christmas eve, but beyond the squealing opening track, it’s a respectable effort.