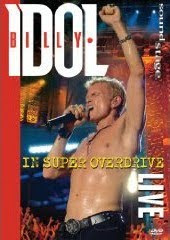 For me, Billy Idol is one of those strange artists. I grew up listening to him, and I like most of his work, but for whatever reason, I never became a real fan. I usually crank up the radio when one of his songs comes on, but I've only got two of his records in my collection. Maybe it's time to fix that problem.

One thing's for sure: He's never been satisfied to stay in one place. From the punk-inflected sounds of Generation X to his more commercial pop-rock of the 1980s to the underrated experimental record "Cyberpunk" to his energetic "comeback record" of a few years ago, "The Devil's Playground," he's covered a lot of ground, and his latest DVD "In Super Overdrive Live" also covers most of it.

This far into his career, it's hard to believe this is Billy Idol's first-ever live DVD. Recorded for the TV series "Soundstage," the performance finds him backed by a solid band. Long-time partner in crime Steve Stevens, of course, provides the guitar work. Brian Tichy, a veteran of Pride and Glory and Ozzy Osbourne's band, among others, handles the drumming duties. Derek Sherinian, who has played with Dream Theater, Yngwie Malmsteen and Alice Cooper, covers the keys, and Stephen McGrath handles bass duties.

If you grew up in the 1980s, as I did, it's hard not to be a fan of Idol's breakout record, "Rebel Yell." It's well represented here with "Flesh for Fantasy," "Eyes Without a Face," "Blue Highway" and, of course, the title track.

After opening with "Super Overdrive" from "The Devil's Playground," the DVD slows down a bit with a poppy renditionsof "Dancing With Myself" and a version of "Flesh for Fantasy" that seems, to me, to lack some of the oomph of the original. But things quickly pick up with the first of two unreleased tracks, "Touch My Love." It's a funky, high-energy tune that gets things headed in a harder-rocking direction.

"White Wedding," always a hit, cranks up the volume with a rock-solid performance of one of Idol's best-known tunes. He follows up with an equally hard-rocking version of the more recent "Scream," one of the highlights of "The Devil's Playground."

The set slows down a bit after that. Idol delivers a smooth, cool version of his hit "Eyes Without a Face," followed by a second unreleased song, "Cry," which doesn't have the impact of "Touch My Love."

That sets up a grand finale that features a few surprises. Idol kicks it off with the new-wave rocker "Blue Highway" from "Rebel Yell" before launching into Gen X's "Ready Steady Go." The expected closer, "Rebel Yell," actually comes a song early to make way for a show-stealing performance of Gen X's "Kiss Me Deadly."

Even though it's been more than 30 years since Billy Idol burst on to the music scene, he's in fine form here -- hair still spiked, lip still curled in that perpetual snarl and fist still pumping. The band, too, is on the top of its game, and it's nice to see Idol and Stevens hitting on all cylinders again. The DVD does ignore Idol's most commercial period in the late 1980s (no "Mony, Mony" or "Cradle of Love") and "Cyberpunk" (not a fan favorite, despite my own affection for it), but it covers most every other period of his career.

While it's not likely as energetic or unpredictable a performance as we might have gotten circa 1984, it's still well worth watching for Idol fans or any child of the 1980s that still loves to crank up the stereo and sing along every time "Rebel Yell" comes on the radio.

Get "In Super Overdrive Live."