Have yourself a metal little Christmas 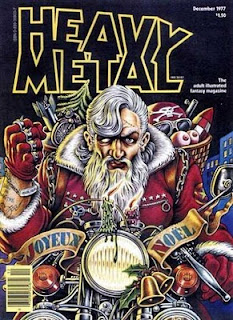 While hard rock and metal outfits have generally been more associated with Halloween than Christmas, the last 10 or 15 years have seen quite a few rockers getting into the Christmas spirit. In truth, the results haven’t always been that great, but the efforts have brought a few gems.

For this list, I’ve tossed out the goof songs like Spinal Tap’s “Christmas with the Devil” or Bob Rivers’ “I Am Santa Claus,” set to the tune of Black Sabbath’s “Iron Man.” I’m looking for tunes that show a little reverence and joy in the season rather than going for laughs.

I’ve also tossed out Trans-Siberian Orchestra, since the entire 10-song list could be made up of their stuff. (I am however particularly fond of their version of “A Mad Russian’s Christmas” and the jazzy “Christmas Nights in Blue,” which I highly recommend.)

So, here’s the list of 10 songs I’ve come up with. Feel free to add your own.

10. “Deck the Halls,” Ted Nugent. From the second volume in the “Merry Axemas” series, this song is delivered in typical, in-your-face Nuge style. It plays a bit like a cross between the traditional song and “Free-for-All.”

9. “Run Rudolph Run,” Lemmy Kilmister, Billy Gibbons, Dave Grohl. Chuck Berry’s version of this song is one of my favorite holiday tunes, and, from Brian Setzer to Lynyrd Skynyrd, I’ve never heard a version I didn’t like. The combination of three most unlikely musicians on this version easily puts it on my list.

8. “Blue Christmas,” Joe Perry. The Aerosmith guitarists twangy take on the Elvis classic is one of the more memorable moments of the first “Merry Axemas” collection.

7. “We Three Kings,” Halford. This song is easily the strongest moment on Rob Halford’s “Winter Songs” record. It’s an upbeat, rocking version of the song with an undeniable melody courtesy of the original.

5. “You’re a Mean One, Mr. Grinch,” Gary Hoey. “How the Grinch Stole Christmas” has always been one of my favorite holiday stories, and the Thurl Ravenscroft original one of my favorite songs. Hoey’s instrumental version really puts the mean into it, though.

4. “Santa Claus is Back in Town,” Tim “Ripper” Owens, Steve Morse, Marco Mendoza, Vinny Appice. Another favorite rock Christmas song given the hard rock treatment. Owens’ vocals really shine on this tune and give it its attitude.

3. “White Christmas,” Zakk Wylde. The flashy guitar hero Wylde has always been a very underrated acoustic player, and this earthy version of the song is one of his better soft moments.
2. “God Rest ye Merry Gentlemen,” Ronnie James Dio, Tony Iommi, Rudy Sarzo, Simon Wright. It took Dio until his mid-60s to be convinced to do a Christmas song by his wife, and it was worth the wait. He and Iommi deliver a dark, dirge-like version of the song suitable for any Black Sabbath record, but retain the reverence of the original.

1. “Christmas Eve (Sarajevo 12/24),” Savatage. I said I wouldn’t include Trans-Siberian Orchestra, and I didn’t … technically. The song was recorded by Savatage for their “Dead Winter Dead” record, a year before Savatage producer Paul O’Neill and frontman Jon Oliva repurposed it for TSO’s debut record “Christmas Eve and Other Stories.” In my mind, it’s the ultimate Christmas tune recorded by a metal band.