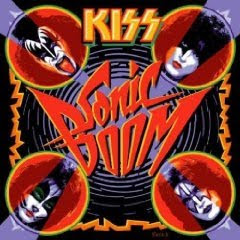 The long-running joke among Kiss fans has been that Gene Simmons would put the Kiss logo on anything except what fans really want -- a new record. He and co-founder Paul Stanley have finally given us that, and, unfortunately, it's really not much more than a cheap piece of plastic with a Kiss logo on it.

It's the culmination of a descent into nostalgia act status that began in the early 1990s. It seemed that Kiss was about to turn another chapter in its history in 1992, having emerged from the hair band days of the late 1980s with a rougher, darker and deeper record, "Revenge." It was their best since the 1970s and, with guitarist Bruce Kulick and drummer Eric Singer, had some real musical chops to back it up. It was a promising moment. Then came the reunion with original members Ace Frehley and Peter Criss. A second record in the same vein, "Carnival of Souls," was put on the backburner and eventually released as a throw-away with no fanfare in 1997 as they prepared for the release of the lackluster "Psycho Circus" in 1998 from the original lineup (it was later revealed that Criss and Frehley played on only a couple of tracks on the record.)

It was nice for guys like me who missed Kiss in the 1970s to see the full show, but it quickly degenerated into a nostalgia act -- to the point that they're now dressing guitarist Tommy Thayer and Singer as Frehley and Criss and trying to pass it off as the real deal. It's a good parallel for this album. While "Sonic Boom" certainly has the sound of the band's 1970s work, it doesn't sound like a band that's just feeling the same vibe of their older work. It sounds like a band that went into the studio with the intent to create a record that sounds like their 1970s work. It's a cold, calculated reproduction of the sound and it comes through all over the record.

There are a few interesting moments. I like the opening riff from “Modern Day Delilah” and the heavy groove of “I’m an Animal” is easily the best piece of music here, and really the only song that I’ll likely take away from this record. But most of it sounds hollow and generic.

Much of the charm of Kiss' classic work -- beyond the bombast of their live show -- is in the fact that they weren't very talented musicians, but the music they made had a raw, energetic honesty to it. This is a heavily sanitized version of that sound, and it simply doesn't work. In the end, "Sonic Boom" sounds much like the band sounded the last time I saw them live a few years back: like a band with no creative spark left, going through the motions and collecting a check.

Posted by Fred Phillips at 6:52 PM