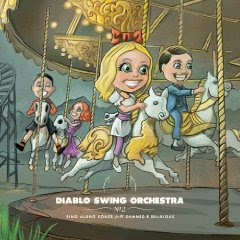 One of my musical interests outside of metal has always been the jazz and swing of the Big Band era. That’s why the Diablo Swing Orchestra’s name immediately caught my attention. Then there’s opening track, “A Tap Dancer’s Dilemma,” which is one of the most interesting songs that I’ve heard in a long time. It blends classic Big Band cool with some crunching distorted riffs and gets Sing Along Songs for the Damned & Delirious off to an excellent start.

Unfortunately, there’s not nearly enough of that mix in the other nine songs on the record. After that, it reverts into more a blend of metal and musical theater. It’s not bad, as I’m also a closet fan of musical theater, but for me, it’s not nearly as exciting as that first track.

Certainly there’s no easy classification for the Diablo Swing Orchestra. Take second track “A Rancid Romance” for example. The song opens with a classical piano piece that leads in to an …And Justice For All-era Metallica riff before the Spanish horns kick in. The Metallica-style thrash riffing continues on “Lucy Fears the Morning Star.” There’s actually some pretty impressive riffing all over the record from Daniel Hakansson and Pontus Mantefors. “New World Widows” features a more modern chugging riff that sounds a bit System of a Down-ish. “Vodka Inferno” has some of the best guitar work to be found. The classically influenced bits are particularly good, and a there’s a nice interplay between dueling guitar and cello by Johannes Bergion in the middle of the song.

But metal, jazz and musical theater are certainly not the only things on the menu on Sing Along Songs for the Damned & Delirious. You’ll find a bluesy shuffly on “Bedlam Sticks,” some Russian-flavored sounds on the short interlude “Siberian Love Affairs,” rockabilly flair on “Memoirs of a Roadkill” and even a little surf guitar on “Ricerca Dell’Anima.”

Vocally, the record is a mixed bag. Most of the operatic stuff from Hakansson and female vocalist Annlouice Loegdlund is far too over the top. At worst, as on the opening of “Bedlam Sticks,” Hakansson sounds like Elvis doing a bad Dracula impression. Likewise, Loegdlund’s glass-breaking opera vocals on “New World Widows” are more like nails on a chalkboard. It’s not all bad in the vocal department, though. There’s a bit of operatic insanity that’s cool in “Lucy Fears the Morning Star” and an interesting blend of operatic and black metal vocal stylings in “Bedlam Sticks.”

There’s an awful lot to like about this record if you’re into strange, avant-garde musical blends. Aside from the aforementioned “Tap Dancer’s Dilemma,” there’s the Peter Gunn-ish guitar riff of “Ricerca Dell’Anima” which sounds like a crunched up spy movie theme. Album closer “Stratosphere Serenade” is also impressive, opening with some nice gypsy strings, punctuated by a thrash riff. The vocal delivery on the song is a little different as well, falling into more of an alternative rock style that’s actually superior to some of the more heavy-handed operatic moments.

Though I admit to being a little disappointed that there wasn’t a heavier jazz and swing influence later in the record, I still really enjoyed it. I love the originality and general craziness. It’s a wild ride with stops all over the musical map, and it’s well worth the few bumps in the road.

Get "Sing Along Songs for the Damned & Delirious."
Posted by Fred Phillips at 9:48 PM