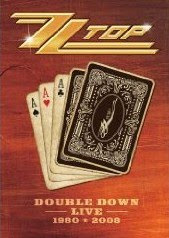 For fans of a certain age, ZZ Top's new DVD, "Double Down Live, 1980-2008," gives us the chance to experience the band at the height of its blues rock power, before the MTV years of the 1980s that brought wild excess and crazy stage shows.

The two-DVD set features a live performance from 1980 recorded live for the German "Rockpalast" show and a performance from their 2008 tour that features interviews and behind the scenes footage. Both are entertaining, but for me, the real strength is the first disc. Recorded on the "Deguello" tour, the set list features most of the songs from that album, as well as some real jewels from the band's early days that fans don't get to hear often. Those are highlights of an outstanding set. There's the hard-rocking "Precious and Grace," the trippy "Manic Mechanic," the driving "Nasty Dogs & Funky Kings," and one of my personal favorite tunes from the Top catalog, the spaghetti Western-flavored "El Diablo."

In addition to some rare gems, there are the expected hits like "Thank You," "Waitin' for the Bus/Jesus Just Left Chicago," "I'm Bad, I'm Nationwide" (another personal favorite), "Heard it on the X," "Cheap Sunglasses," "La Grange" and "Tush." A couple of cool covers are thrown in with "Dust My Broom" and "Jailhouse Rock." Mix in some other well-known songs that just don't get played that much anymore, like the raucous "Beer Drinkers & Hell Raisers," "Arrested for Driving While Blind," "She Loves My Automobile" and "Fool for Your Stockings," and you've got one heck of a rowdy set.

You've also got a rowdy band playing those tunes. At first, it's hard to recognize singer/guitarist Billy Gibbons because I'm so used to seeing the grizzled road veteran he's become these days. He's fresh-faced behind the ever-present beard and full of energy, running around the stage, jumping up and down and just generally having a great time. The interplay between Gibbons and bassist Dusty Hill is a lot of fun, but not quite the over-choreographed performance that it would become by the time that I got a chance to see them live in the mid-1980s. Drummer Frank Beard is just as cool as ever, stoically pounding away on the skins, tons of energy hidden behind his laid back expression.

The band rolls through a set of classics having just as much fun as the delighted audience before delivering a couple of encores that include the two covers, the classics "Tush" and "Tube Snake Boogie," and closing with a high-octane rendition of "Just Got Paid," which might be the best moment on either DVD.

The second disc, which features the 2008 performance, is a little slicker than the first, which is simply a performance video. There are more camera angles and heavier editing, splicing in scenes from numerous shows, but these sometimes detract from the power of the band's stage presence. There seem to be some video/audio sync issues on some of the more artistic shots that are possibly intentional, but were a bit annoying. And when Dusty Hill blasts out those big bass runs at the end of "I'm Bad, I'm Nationwide," I'd much rather be watching work it out than footage of the crew setting things up. There are also some interesting interview pieces scattered throughout that are certainly worthy of their spots.

Surprisingly, the set list here is solidly old school, too. There are only half as many songs as the first disc, but only two from the MTV days on, "Got Me Under Pressure" and a deeper cut from the "Eliminator" record, the semi-ballad "I Need You Tonight." The sets share a few songs in common: "Waitin' for the Bus/Jesus Just Left Chicago," "I'm Bad, I'm Nationwide," "Heard it on the X," "Just Got Paid," and, of course, "La Grange" and "Tush." The second disc also shows ZZ Top getting back to the roots of those earlier shows. The sets are stripped back and the focus is placed firmly on the men and the music.

The voices of Gibbons and Hill are a little gruffer and rougher on these tracks, but the music is still tight. There is occasionally a rough around the edges spot, particularly on this version of "Heard it on the X," which seems a bit off-kilter at points, but you'll forget those with the performances of "Jesus Just Left Chicago," "Just Got Paid" and "I Need You Tonight." The bluesy spots in this set are the truly bright ones. The band cranks out an amazing version of "Blue Jean Blues" and a killer cover of "Hey Joe" that steal the show. The Rev. Willy G. has, hands down, one of my favorite guitar tones ever, and on those two tracks, he nails it.

Both sets are solid slices of ZZ Top history and well worth owning, but as slick as the modern end is, it's the raw concert footage of the earlier show that remains the most exciting and electric. If you missed ZZ Top in the 1970s or early 1980s, I'd highly recommend correcting that by picking up "Double Down Live."

Get "Double Down Live."

Posted by Fred Phillips at 9:32 PM