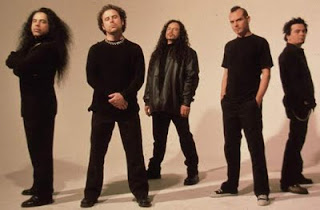 Los Angeles' sons of metal, ARMORED SAINT, are set to enter Tranzformer Studios in Burbank, CA to begin recording the band's sixth full-length studio album. Tranzformer Studios is owned by Dave Jerdan (Alice in Chains, Jane's Addiction, etc) who produced ARMORED SAINT's 1991 classic "Symbol of Salvation" and Bryan Carlstrom who handled engineering on the same album. The SAINT will be working with Bryan Carlstrom who will once again handle engineering duties with the bands very own Joey Vera producing, and both Joey and Bryan mixing the record. A partial song list for the upcoming album, which is expected to hit streets in the spring 2010 is: Black Feet, Chilled, Loose Cannon, Blues, La Raza, Head On, Get off the Fence, Left Hook From Right Field.

Here's what ARMORED SAINT vocalist John Bush had to say about how the new album came together:

“About a year and a half or so ago Joey asked me if I'd be interested in writing some songs. I was in the right mind finally, so I said send me something. To be quite honest, I wasn't thinking in terms of ARMORED SAINT but more like just writing rock music. I felt pretty free with that mentality and the ideas felt very organic. With every passing song things improved and next thing we knew we had about eight songs demoed. Although the idea of sparking something completely new was appealing it became clear that if it was Joey and I the reality was, let's not kid ourselves; this is ARMORED SAINT.

So here it comes. Embracing my inner R&B singer and coupling that with our influence of the great seventy's hard rock band's we grew up on.”

“John and I began writing over 14 months ago and in the beginning we had only a general musical direction in which we were going. Once we decided to keep writing and with more of an intention of turning it into an ARMORED SAINT project, we were faced with a few questions. One was, how does this new music we're writing fit into the current musical styles of today? And should we care? We quickly answered the latter. We realized we should do what we always did and that is to write good songs. And for ourselves first. We are not unaware of our parameters in which we have created over the past 25 years, but we are also not afraid to take chances and simply do what we do best. The idea of trying to continue where we left off over 10 years ago since our last release is not very appealing to me. I have to let go of what I did in 1991 and in 2000. Nothing at all against what we've recorded in the past but my head is in a different place now. Trust me; I still want to kill your senses with music, but just in a different way.”

To get a taste of what the new ARMORED SAINT album will sound like, head over to the band's MySpace page where they're streaming the demo version of "Loose Cannon" (performed with a drum program). Loose Cannon gives fans a glimpse into ARMORED SAINT's writing process and is also a nice taste of what's to come on the band's forthcoming full-length studio release.