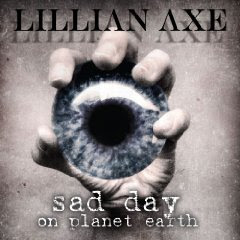 I was thrilled a few years back when Lillian Axe, a live-show staple of my misspent youth, made a strong comeback with a new singer and new record "Waters Rising." So I was excited to get my hands on the follow-up, "Sad Day on Planet Earth." Unfortunately, this record, while still good, doesn't live up to the standard set by "Waters Rising."

In all fairness, the songs on that record were written over the course of many years with some tweaked in numerous live performances. These 15 tracks, on the other hand, are the result of only a couple of years' work. Perhaps its the melancholy tone of much of the record or perhaps it's an often-flat mix, but there just doesn't seem to be as much energy here.

The songs, for the most part, are not bad. But a clearer, more dynamic production could certainly benefit the movements of songs like "Hibernate" or bring out the more atmospheric moments in "Down Below the Ocean" to give the record a little more pop.

As with "Waters Rising," there's a nice mix of the various phases of Lillian Axe. There are heavier, hard-rocking numbers, some pop-oriented moments, shimmery ballad passages and more progressive and experimental material. "Megaslowfade" gets things started on an energetic note and kind of throws a little bit of everything at the wall. Then things get more somber with the powerful "Jesus Wept," but the band doesn't stay there long, following up with a straight-up, old-fashioned hard rocker in "Ignite."

That's when the album is kicking along well, when there's a blend of the heavier-handed numbers that fit with the environmental theme of the record and lighter, more energetic pieces. It's at its best when they get the blend right in the same song. "Cold Day in Hell" is a perfect example, opening with a heavier riff before settling into mid-pace territory and deliving another great chorus melody, a formula that plays well again later in "Kill Me Again." "Blood Raining Down on her Wings" offers an interesting mix of the classic Lillian Axe ballad and a bubble-gum rock riff that's strange for the lyrics. The blending doesn't always work, though. "Within Your Reach" opens with a 1950s sounding melody that's a little strange and reminiscent of a popular song that I can't quite put my finger on.

There are also a few songs on the record that seem to blend together a little. "Nocturnal Symphony" opens with a classical-influenced piece of music that's interesting, but fades. The same with "Divine," which has a nice, gritty groove on the opening, but never seems to go anywhere. Somewhere in between is "Fire, Blood, The Earth and Sea," their epic, over-the-top closing record that, while impressive in moments, just tries to do a little too much.

Those moments are eclipsed by songs like "Grand Scale of Finality," though, which features a catchy, irresistable melody that again seems to be at odds with the darker lyrical content. It reminds me a bit of an early Queen melody.

Overall, I like the record and most of the songs on it, but for some reason, it just doesn't sing to me the way that "Waters Rising," "Psychoschizophrenia" or the band's first two records did. I understand that, for Steve Blaze, each successive Lillian record has been about stretching his musical boundaries, more serious musicianship and more complex compositions. But here, everything seems very heavy-handed. I guess, every now and then, I'd just like to hear the band break out a fun and frivolous three-chorder like "My Number" for old-time's sake. Since they don't even play that tune live anymore, I don't suppose it's going to happen, but it might help break up the gloominess of "Sad Day on Planet Earth." After all, there's no law that says to be a serious musician you have to be serious all the time.

Get "Sad Day on Planet Earth."

Posted by Fred Phillips at 9:25 AM