Review: The Gates of Slumber, "Hymns of Blood and Thunder" 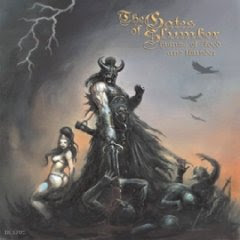 Black Sabbath being the fount from which all doom springs, it's only appropriate that you should hear their influence in bands of the genre. But you could argue that Gates of Slumber cross the line of influence right into worship. Not that that's a bad thing. "Hymns of Blood and Thunder," the latest offering from the Indy-based trio, is heavy on darkness, gloom and oppressive atmosphere. It clearly pays homage to the bands that came before, particularly Sabbath, but never comes across as sounding like a tribute band.

The record opens with a couple of uptempo numbers, "Chaos Calling" and "Death Dealer," which have the vibe of the later, Dio-era Sabbath, the first reminding me a bit of "Neon Knights." After that, though, things settle down into the old school sludgy stomps, but there are some occasional surprises. "Beneath the Eyes of Mars" opens with an interesting rolling drum intro from "Iron" Bob Fouts, that leads into a nice bit of guitar work that builds the first wall of sound feeling on the record. The instrumental "Age of Sorrow" features some cool clean guitar work that builds into slow, soulful electric noodling, while there are some nice acoustic atmospherics layered under album closer "Blood and Thunder." "The Mist in the Mourning" throws the only real curve ball on the record. It's a medieval ballad with some female vocals mixed in, one of the more interesting tracks.

But the backbone of this record is big, chunky Iommi-style riffs, and there are plenty of them offered up by frontman Karl Simon. "Descent Into Madness" could be ripped from any 1970s Sabbath record, and "The Doom of Aceldama" opens with a big, sludgy beautiful guitar riff. Perhaps the strongest tune on the record, though, is "The Bringer of War" which puts a fantastic, grooving riff out front that gives it a Candlemass vibe.

But while Simon's guitar work is solid, his vocals aren't quite so strong. He's not a horrible vocalist, but the weaknesses are more than apparent in places, as on the verse of "Beneath the Eyes of Mars." Then again, vocals have not often been the strong point of the doom genre. Lyrically, he covers the subjects that you'd expect looking at the Frank Frazetta-inspired cover art and song titles. He does offer a nice little tip of the cap to primary influences in "Iron Hammer," with the line "over the mountain, into the void."

Hymns of Blood and Thunder is an unabashedly old school doom record -- in songwriting, execution and production. The album has a dirty, distorted 1970s mix with a little of the warbling, synth-like sounds of St. Vitus. It's a mix that would normally turn me off in a modern record, but seems only appropriate for this sludgy celebration.

Gates of Slumber won't find a place on my year-end top 10 list with this effort, but they will find a place in my permanent collection. I'd highly recommend it for fans who like their doom slow, dirty and heavy.

Get "Hymns of Blood and Thunder."