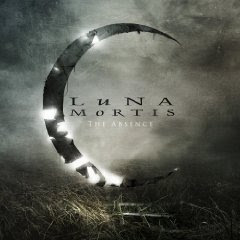 I was a bit surprised on picking up Luna Mortis' "The Absence" to find that I'd heard the band before. I remembered reviewing 2006's "Way of the Blade," which they recorded under the name Ottoman Empire. I didn't remember being very impressed by it. Maybe I should dig it out and give it another listen because their debut as Luna Mortis is a completely different story.

Blending elements of thrash, power metal, progressive and even melodic death metal, the Wisconsin-based band takes its cues from all over the metal map. Opener, "Ash," starts with an old school thrash gallop, then drops into an entrancing prog/power mode before exploding into a snarling Swedish-influenced death metal monster. It settles into a blazing power metal mode for the bridge before returning to a prog chorus. In some hands, that could become an unlistenable hodgepodge of styles. Here, though, it flows smoothly and naturally, which is the real appeal of Luna Mortis.

Vocalist Mary Zimmer has a nice middle-ground voice for female metal singers. While she can pull off the expected angelic bits, there's no overbearing soprano. She's, at times, reminiscent of Lacuna Coil's Cristina Scabbia, mixing tenderness and toughness, and her vocals are often hypnotic, as on the pure prog number "This Departure." That is, of course, when she's not snarling like a rabid beast on the death metal-influenced portions of the record. Guitarists Brian Koenig and Cory Scheider deliver tight, memorable riffs along with smooth and enticing leads. There's nothing incredibly fancy in their guitarwork, but it's perfect for the sound of the band.

Over the course of the record, Luna Mortis bounces in and out of styles with reckless abandon and marvelous results. The title song is pretty much a full-on melodeath number with just a few interludes of the more mellow stylings. It's an interesting counterpoint to a song like "Forever More," which is more of a straight-ahead European power metal number with soaring chorus vocals and upbeat guitar riffs. But the true strength of Luna Mortis is when they blend the styles together with songs like album opener "Ash," the aggressive thrasher "Never Give In" and the haunting "Phantoms."

"The Absence" is sure to bring plenty of comparisons, and if I had to simplify things, I'd say Luna Mortis reminds me a little of a cross between Dream Theater and Arch Enemy. But I think that would be really shortchanging the band and the ground they cover. The songs are memorable, the transitions are seamless, and though the year is young, I'd guess this record is destined to be one of my favorite of 2009.