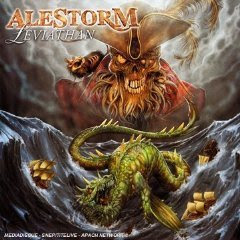 In a 2008 filled with great metal records, Alestorm's "Captain Morgan's Revenge" may not have been the best from a musical standpoint, but when it comes to pure, unadulterated, campy fun, no one topped these Scottish pirate metallers.

In time for a U.S. tour, and in anticipation of the follow-up record due out later this year, we get this four-song EP. The record opens with the title track, a six-minute ode to the fabled beast of the deep that has just as much camp as last year's record, if not quite as much fun. It follows the power/folk metal blend that they established on the last record, though it lacks the big hook that so many of those songs had.

Less interesting is a reworking of the tune "Heavy Metal Pirates" from their original demo, which is more corny than fun, and a German version of "Wenches and Mead" from the last record.

The centerpiece of this EP, though, is a song called "Wolves of the Sea," which I'm told by a European friend is a cover of an awful pop song by a Latvian band called Pirates of the Sea. It seems to have been tailor-made for Alestorm, though, and it delivers all the fun and silliness that I expect from them. Yes, it's a bit goofy, but it's also impossible to get out of your head.

While history is littered with metal bands that take a gimmick too seriously and make a joke of themselves, the difference here is that Alestorm is in on the joke, and they play it to the hilt. If you're a fan of power or folk metal with a sense of humor, it's sure to leave a big grin on your face. I'm looking forward to the full record later this year.