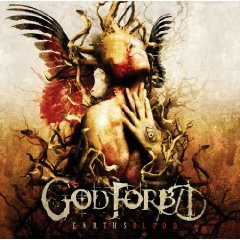 This record had the misfortune of coming out on the same day as Lamb of God's "Wrath," and has gotten a bit shortchanged in my listening because of that. It's a shame, too, because this record is easily as good, if not better.

God Forbid came to fame as part of the metalcore movement which blended elements of metal and hardcore. While the subgenre quickly stagnated, a few bands progressed and improved. God Forbid's last record, "IV: Constitution of Treason," was one of the best of 2005 and showed a band on the move. It was a more melodic, more complex record than their previous work, offering a wider range of sounds. "Earthsblood" continues on that path, bringing in even more progressive influence.

That's not to say that God Forbid can't still deliver the blocks that built the subgenre -- chugging guitar riffs and shouted verse vocals mixed with more melodic and catchy choruses. They prove it with "War of Attrition," which despite being one of the more typical metalcore numbers is also one of the best on the record. They can still deliver a solid breakdown as well. Just check out the ferocious segment from "Empire of the Gun."

But what makes "Earthsblood" truly interesting is the even more varied progressive and melodic elements the band adds. Sometimes it doesn't work quite as intended. "The New Clear," for example, perhaps takes those aspects too far and comes off sounding a bit like a metal band trying to play Santana. But when they blend together, as on "The Rain," it's well above and beyond what the other bands in the subgenre are doing.

The star of this record, as with the last, are the guitars of Doc and Dallas Coyle. They unleash some primo riffs here, most notably on the thrashing opening of "Shallow" and the old-school hard rock opening of "Walk Alone." The vocals see some changes as well. Lead vocalist Byron Davis still rages away, but the record features more clean vocals and harmonies, which are used particularly effectively to punctuate Davis' snarls on the epic title track.

While many of their contemporaries in the metalcore subgenre stagnate and fade, God Forbid continues to push forward and get better with each record they release. "Earthsblood" is yet another triumph for what may be one of the most underrated bands in the metal world right now.