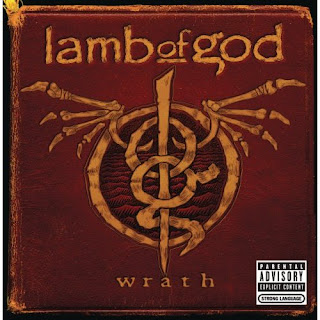 My appreciation for Lamb of God was a slow evolution. After hearing their debut "New American Gospel," I pretty much wrote them off as boring and repetitive. The follow-up, "As the Palaces Burn," was a little more interesting, but the first song from the band that really caught my attention was the stop and start riffing and stronger melody of "Laid to Rest" off their major label debut, "Ashes of the Wake."

It wasn't until Lamb of God's last record, 2006's "Sacrament," that they completely won me over. With stronger melodies, more expressive vocals from frontman Randy Blythe and a strong thrash influence, it became my favorite record of that year and made "Wrath" one of my most anticipated releases of this year.

On first take, "Wrath" offers a bit of a throwback to their earlier records. The hooks don't come quite as easily here as they did on "Sacrament," and there seems to be an effort to make the record sound heavier. Still, the thrash influences that they picked up on "Ashes" and "Sacrament" shine through. The band locks into an almost Pantera-like power groove on occasion. "Dead Seeds" may be the best example of that, bordering on Pantera worship at points, but it pops up in smaller doses throughout the album. There's also more of the Testament influence that we heard on Sacrament, particularly in Blythe's vocals early in the record on songs like "In Your Words," and the chorus of first single "Set to Fail."

While the hooks here aren't always conventional, they do have a way of burrowing into your head. A couple of listens to a song like "Broken Hands" and it will play in your head for days.

When the more melodic newer sounds of Lamb of God collide with the old intensity, it's also a potent mixture. Check out the venomous "Fake Messiah," one of the strongest performances here. It opens with a pounding snare, reminiscent of "Black Label" from the band's debut record, but offers much more musically and melodically than anything from that record.

Blythe continues to expand and explore his vocal range, even throwing in some clean vocals here and there throughout the record. The style is reminiscent of Phil Anselmo and a far cry from those monotonous roars of the band's early work. Guitarists Mark Morton and Willie Adler continue to improve their chops as well with some great riffing and a little more exploration and layers on top of those chunky riffs. They also add to the variety by blending a few mellower passages into the raging attack including a couple of brief acoustic interludes.

Will the heavier parts of "Wrath" be enough to win over those long-time fans that were turned off by the stronger melodies and hooks of "Sacrament?" I don't know. But it's certainly a satisfying record for those of us who were won over by those same elements. "Wrath" manages to walk that fine line between melody and heaviness that few modern bands seem to be able to hold.