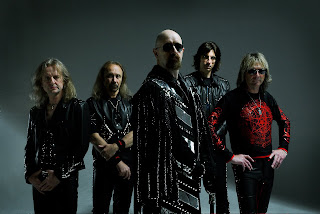 For the past few years, Judas Priest has unquestionably ruled the U.S. summer concert scene, having been a part of both the top-grossing Ozzfest and Metal Masters tours. And this summer, Priest has done it again, by uniting with Whitesnake for a series of stateside shows. Priest will be celebrating the 30th anniversary of the classic album "British Steel" (it was originally issued in April 1980), by performing the album in its entirety for the very first time ever live on stage! In addition they will be playing some old favorites.

Along with 1982's "Screaming for Vengeance" and 1990's "Painkiller," "British Steel" has long been considered one of metal's all-time classics. It was with this release that Priest truly broke through to the masses, with a pair of tracks that have become fixtures on rock radio - the enduring anthems "Breaking the Law" and "Living After Midnight." But like all classic albums, there is not a single weak track detected on "British Steel," as evidenced by such standouts as the perennial concert highlight, "Metal Gods," as well as "Rapid Fire," "Grinder," "United," and "The Rage," among others.

Produced by Tom Allom, "British Steel" was recorded at the Tittenhurst Park in England - which is a mansion owned at the time by former Beatle Ringo Starr, and previously owned by John Lennon and Yoko Ono. In 2001, the album was remastered and reissued with extra bonus tracks, and also, was the subject of an in-depth study as part of the popular "Classic Albums" DVD series.
=
"The opportunity to perform live on stage in its entirety the whole of 'British Steel' is a dream come true for all of us! We're really excited and looking forward to presenting the album live on stage - fans will be able to enjoy a taste of true heavy metal when it was in its early, raw state!" said the group in a statement. "Plus, we will of course be throwing in a few other Priest classics!"