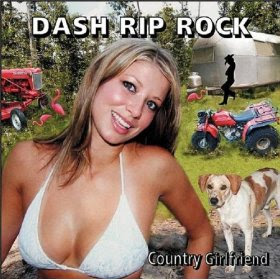 If you went to college in Louisiana in the last 25 years or so, there's a good chance that you spent a few weekends with Dash Rip Rock. For my money, there's never been a better party band, and their first three records all still get regular time in my CD player.

Since 1991's live set, "Boiled Alive," though, the band's output has been spotty as they explored the elements of their sound. They've tried an alternative sound, a more country sound and even a concept album with 2007's punk-heavy "Hee Haw Hell," a redneck/Cajun take on Dante's "Inferno." They scored a hit in 1996 with the novelty tune "Let's Go Smoke Some Pot," but really have never gotten the widespread recognition that they deserve.

These days singer/guitarist Bill Davis is the only remaining member from the band's most popular lineup. Drummer Fred LeBlanc split after the band's 1989 record "Ace of Clubs" to form Cowboy Mouth. Bassist Ned "Hoaky" Hickel can't be coaxed off his boat in Florida these days. Still Davis has soldiered on, pumping out new Dash music, and current bandmates Eric Padua and Patrick Johnson complement his manic energy nicely.

On "Country Girlfriend," Davis and Co. return to a more Louisiana-centric sound, with quite a bit of Mardi Gras flavor sprinkled throughout. There's plenty of their famous tongue-in-cheek humor with some classic politically incorrect Dash-style numbers like "New Orleans Needs Stronger Dikes" (yep, your mind's on the right track there) and drinking songs like "It's the Beer" and "Beertown USA." There's some harder-rocking material as well, with the Internet pun-filled "Google This" and "Let the Trucks Roll," a tribute to truckers.

Davis also shows off the storytelling flair that's marked Dash's music in the past, as he sings about a Bourbon Street character in the swinging "BS Cowboy." And the more sensitive side is on display with the soft, acoustic "Please Come to the Mardi Gras."

While there's not a song here that's, in my mind, as powerful as "Endeavor" from their self-titled debut, energetic as "Johnny Ace" or as fun as "Bum Fuck Egypt," it still sounds like a Dash Rip Rock record after all these years. "Country Girlfriend" is as solid as any the band has released in the years since those first three albums. I can definitely imagine the smoky barrooms that I was in so many times with people waving a beer and singing along with most of these tunes and having a great time. And in the end, when you're talking about Dash Rip Rock, that's really all that matters.