News: Haunted frontman Peter Dolving lashes out at other bands on eve of U.S. tour 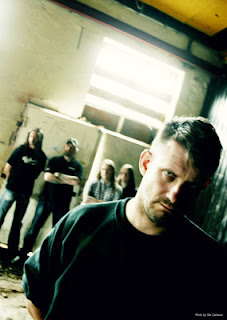 The Haunted's outspoken and sometimes controversial frontman, Peter Dolving, checked in with his thoughts in regards to the band’s upcoming North American headlining tour, which kicks off tomorrow, with The Agonist and Merauder in the support slots. The Haunted are supporting their latest record "Versus." Visit www.myspace.com/thehaunted to view their complete itinerary.

“Seriously folks. You could go out and see any of a number of bands in the next four weeks. What you'll receive will of course be generic deliverance of generic metalcore by the numbers and certainly you won't be more than slightly disappointed. The big one this time around out there being the Lamb Of God tour. Which will according to business-planned management crawl itself around the North Americas for the next year and a half or so like a big snake. You could dig that shit and think ‘Holy mutherfucking hell! That shit rocks!’ or you could go and see the Haunted once and for all prove what metal is all about. But only if you want to have a good time. Only if you want to feel alive. Only if you like that feeling of actually realizing everything is not fucked utterly and beyond belief. But I guess if you are a sad, self-pitying son of a bitch you won't go. Oh what the hell, really, don't go. Most of those who read this don't really give a shit anyway do you? You'd rather stay in a saline filled tank fed intravenously with a constant intake of whatever, whoever carries the biggest gun and wad of dollars has to say wants to feed you.

“You know how fucking sick we are of the bullshit that surrounds trying to tour and survive in a market completely oversaturated. You know there are 50 shit bands out there to every good one. And no, I'm not saying YOUR band is shit. I'm just stating a fact, one we all know is true. I kinda feel bad for everyone who's caught in the middle of it, promotors, PR people, marketers. Sure there's plenty of work, but it sure as fuck must be getting to people. All the horseshit involved with bringing the next ironic bunch of just out of high-school dooods with the right tattoos or t-shirt based identikit to the stage. And when they get there it's the same shit as the one before. What do I know. Maybe it will all mutate into something completely new. Something else that the wolves can sink their teeth into and suck empty of lifeblood. Come on people. Do you think that is going to happen? Of course it will. Hopefully there will be those bands out there that just keep going. No matter what. As far as we're concerned. Fuck it all. We are touring the North America again and we're looking forward to it. If you want a world class performance and a kick ass night of metal come and see us. If not, fuck off.”
Courtesy: Century Media
Posted by Fred Phillips at 2:18 PM