Review: Jesse James Dupree and Dixie Inc., "Rev It Up and Go-Go" 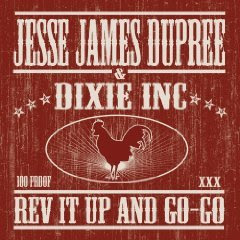 It's hard for a three-chord AC/DC-style band to win me over, but somehow Jackyl managed to do it in the early 1990s. Maybe it was the humor in their music, maybe the Southern rock overtones, maybe the Ted Nugent-style attitude. Whatever the reason, I still occasionally pull out one of their records and give it a spin today. So when I heard about frontman Jesse James Dupree's new project, I had to give it a try.

"Rev It Up and Go-Go" is an interesting record -- really an interesting couple of records. The first half of the album is pretty much what you'd expect. It's straight up, attitude-filled, occasionally raunchy rock 'n' roll in the Jackyl style. The title track kicks the record off on a solid note with an opening banjo riff and plenty of energy once the rock kicks in. Dupree extols the virtues of good old boy Southern life, while giving shouts to some of his favorites -- Lynyrd Skynyrd, Kiss and Hank Jr.

"Bite," "Drop Dead Ready" and "Tank" follow in that style, filled with Southern grooves, dripping with attitude and loaded with solid hooks. When Dupree turns down the attitude a little, the results are mixed. "1095 Days" has its moments, but isn't quite as strong as the earlier tracks, and "Get to Me" seems to drag a little in places compared to the higher energy tunes. But songs like the infectious "Money, Lovin' and Speed" more than make up for the lost momentum.

Guitarist Charlie Star lays down some nice crunchy and catchy guitar riffs under Dupree's ranting and raving vocals, and the rhythm section of Jackyl bassist Roman Glick and drummer Mike Froedge is solid. In short, if you like Jackyl, you should love the first half of the record.

The second half of the album, is a little different. Dupree is joined by Richard Young and Fred Young from the Kentucky Headhunters for a set of country songs. The format of this part of the record, modeled after an old-fashioned country radio show, is a little corny, but I guess that's the point. Surprisingly, it sounds like Dupree is having a lot more fun here than on the Jackyl-styled music.

Some of the country songs, co-written by the Youngs, are surprisingly solid. The humor of "Reality Star" and "Had to Get Stoned," which cover very traditional country songwriting territory are a lot of fun. "The Party" and "Well Enough" are also solid tunes. While I'm not sure Dupree could make a go as a full-time country singer, it's still a blast to listen to.