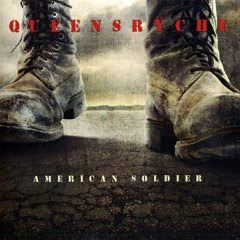 I'm really torn when it comes to this record. On the one hand, I want to like it because it's an ambitious project, and perhaps one of the most important concepts that Queensryche has attempted. On the other, I've had trouble really getting into anything that Queensryche has done since "Empire," way back in 1990.

After putting out three classic records in a row with "Rage for Order," "Operation: Mindcrime" and "Empire,' the band began to explore some different sounds and, along the way, lost its focus. The result over the past nearly 20 years has been a mish-mash of styles and a general lack of the spark that fired the band on those three records.

Now we have "American Soldier," a concept record inspired by singer Geoff Tate's father's experiences in Korea and based around the life of soldiers from World War II to the current conflicts in Iraq and Afghanistan. In writing the record, Tate interviewed a number of soldiers to get the feel of life as a soldier. Many of these interviews have made their way onto the record in the form of sound bites. Some songs, like second track "Unafraid," are little more than a series of comments from soldiers set to music. Actually, these moments are some of the better pieces of "American Soldier." The soldiers, certainly, can tell their own story better than the band.

The record starts with boot camp on the song "Sliver," which is a little darker and more modern than the rest of the record, with an almost rapped delivery in places. The first real taste of Queensryche comes in the third track, "Hundred Mile Stare," a droning, melancholy ballad-ish tune that's not bad, but really has nothing to recommend it either. The same could be said of the next tune, "At 30,000 Feet." On those two tracks, it seems that the band is going for a gut-punch on the listener, but like much of Queensryche's later work, the songs really lack the intensity and connection to produce that reaction.

Things begin to pick up a little with "A Dead Man's Words," another dark song that gives me a little more of the progressive elements and layers that I want from Queensryche. It's the beginning of an uptick in the middle of the record. Next track, "The Killer," offers the most memorable hook on the record, and "Middle of Hell" is one of the more interesting musical pieces on the record. First single, "If I Were King" opens with a haunting and harrowing story from the front lines that delivers the gut-punch that the band hasn't been able to do musically and raises the stock of a song that's really not that interesting otherwise.

"Man Down!" will likely be a favorite of fans of Queensryche's older, heavier style. It's one of the most aggressive tracks here, and it's not bad. Tate brings his daughter in for a vocal appearance on "Home Again," which despite being one of the poppiest tunes on the record is one of the few that makes an actual emotional connection.

"American Soldier" is not a bad record and certainly worth a listen for subject matter alone. It's well-written and well-played, though many of the songs are very similar and tend to blur together. Ultimately, I wish that the music could create the same kind of emotion and connection that the recorded stories from the soldiers do. That would have made it a great record.

If I Were King @ Yahoo! Video
Posted by Fred Phillips at 5:14 PM