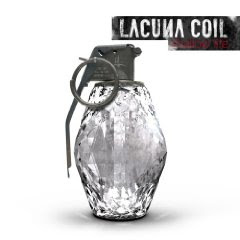 Dance beats are not something that I look for in music. Quite the opposite, in fact. They're usually something that will make me run as far away as I can. Which makes it really puzzling why, as I was driving to work this morning, I was blasting "I Won't Tell You" off Lacuna Coil's latest record "Shallow Life," due out Tuesday. More troubling, I hit repeat -- twice.


It's a theme that runs throughout this album from the Italian goth rockers, which is perhaps their most commercial effort to date, but is also undeniably good.
After kicking around since the mid-90s, Lacuna Coil captured some attention outside the metal world with the release of 2002's "Comalies," an amazing record that offered a blend of melancholy tunes and hook-laden rockers. The follow-up, 2006's "Karmacode" just didn't hit me right, though. The bouncy, more commercial approach on the record didn't appeal to me. Which again, brings me back to wondering why I'm digging "Shallow Life" so much.
Certainly, there are bits on "Shallow Life" that go back to the "Comalies" and earlier sound, but the bouncy rhythms and more commercial elements are still there, too. Perhaps it's the blend. After opening the record with the more rocking "I Survive," they dive right into the high energy "I Won't Tell You," which like I said, is really a dance song (albeit a heavy dance song). That's followed by mid-tempo numbers "Not Enough" and "Not Afraid," which both have more than their share of heavy guitar riffs to go with the quieter, more introspective moments.
Then the energy gets kicked up a notch for the surprisingly fun "I Like It," which finds singer Cristina Scabbia showing some real attitude, being flirty and caustic by turns. (Did I just use the word "flirty?" First dance beats and now this, I must really be losing my edge.) The song is absolutely infectious, and one of the high points of the record even though it's the poppiest track to be found.
"Underdog" is one of the heavier tracks here with some nice thick guitars and a more prominent role for male vocalist Andrea Ferro. Normally with Lacuna Coil, I prefer Scabbia's vocals and like Ferro in a supporting role (it was one of the problems I had with "Karmacode"), but occasionally it really works to give him a heavier load. It works again on the first single "Spellbound," where Ferro delivers the verse, turning the chorus over to Scabbia for a response. It's a high energy, rocking number and perhaps the best on the record.
There are a few stumbles along the way. The ballad "Wide Awake," despite being interesting in the beginning seems to drag after a while, and the title track, which closes the record, seems a bit of a downer to close a really good album on.
While the standout numbers are "I Won't Tell You," "I Like It" and "Spellbound," there are plenty of very solid songs to be found on the record. "The Pain" is a slow number with an unusual melody, but really catchy. The striking chorus of "Unchained," combined with some nice crunchy guitars also provides a much needed shot of energy toward the end of the record.
Scabbia and Ferro's vocals are really spot on, the band is tight and the record sounds great. The hooks come often and they stick with you. Everything seems to fall into place for a pleasant surprise.
Is it commercial? Definitely. Does it have some very non-metal elements? Absolutely. Is it the equal of "Comalies?" I don't know. I'll reserve my judgment on that. What I do know is that it's an amazing record, and once you hear it, you won't be able to get it out of your head.
Get "Shallow Life."