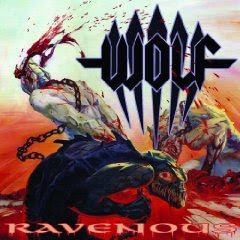 It's nice to know that every couple of years I'll get a blast from the past from Sweden's Wolf.

While the traditional melodic metal that I grew up on has been gaining a foothold again recently, these guys have been playing the throwback style for years -- well before it became a trendy thing to do.

If you're familiar with Wolf's previous efforts, you know pretty much what to expect. They're not trying to reinvent the wheel. They take the building blocks provided by classic bands like Iron Maiden, Judas Priest and, particularly on this record, Mercyful Fate, put them together and try to play it as well as they can. They're certainly not ashamed to play an old-fashioned brand of metal, and I'm happy about that.

That said, they don't stick to just one brand of traditional metal. The record opens with the Priest-influenced burner "Speed On," and it really sets the tone for what's to come. That's followed by "Curse You Salem," influenced heavily by Mercyful Fate. Vocalist Niklas "Viper" Stalvind even sounds like an early King Diamond on the track. Then comes "Voodoo," which is more along the lines of the early '80s sound that was coming out of Los Angeles. All three are great tunes that get the record started well.

Guitarists Johannes Axeman and Richard "Raptor" Holmgren give fans of old-school metal a lot to celebrate in their riffing on songs like the galloping "Hiding in Shadows" and "Whisky Psycho Hellions," which appropriately sounds a bit like a crunched-up Irish drinking song. The pair are obviously heavily influenced by Priest's Glenn Tipton and K.K. Downing and Fate's Hank Shermann, who also lends his guitar talents to the record.

Stalvind's vocals are solid for the style, though he does occasionally get a little nasally for my tastes. Lyrically, the content on "Ravenous" is not exactly Dickinson (not even Bruce). There's a lot of cliche, particularly on songs like "Hail Caesar," but that almost comes with the territory. The only time I actually cringed was at the awful imagery in "Love at First Bite," fortunately the song is saved by a fantastic opening riff and a melody that sticks in your head. (Though you're not likely to sing it out loud.)

So, yes, "Ravenous" has its hits and misses, and I don't believe its quite as good as their last record, 2006's "The Black Flame." But if you long for those halcyon days of early 1980s metal, you can't go wrong with Wolf, and "Ravenous" is a worthy addition to their catalog.

Posted by Fred Phillips at 5:15 PM