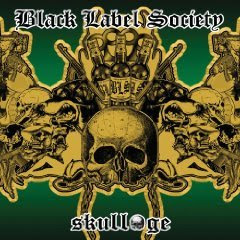 Your first thought on looking at Black Label Society's latest collection, "Skullage," may be "didn't we just have a BLS best-of package a few years ago?" Aside from the most obvious difference, the CD/DVD deluxe package (also available as CD and DVD seperately), "Skullage" offers quite a bit that first collection didn't.

The first difference you'll note quickly by looking at the track listing for the CD. It's light on singles and heavy on album tracks. Sure, the band's most well-known songs, like "Stillborn" and "Suicide Messiah," are represented, but you'll also find the punishing down-tuned riffing of "13 Years of Grief" from their "Stronger Than Death" record, the kind of song you're not likely to find on any "best of." Likewise, the collection avoids the obvious choices from bandleader Zakk Wylde's southern rock project Pride & Glory and his acoustic record "Book of Shadows," instead giving listeners deeper cuts like "Machine Gun Man" and "Dead as Yesterday." The track list also includes songs from his two most recent records, "Mafia" and "Shot to Hell," that weren't on the last collection.

The first real treat for fans, who likely have all of those songs already, is the inclusion of the Slightly Amped acoustic performance that was available previously only as an iTunes download. The show features Wylde and guitarist Nick Catanese on four stripped-down tunes that showcase Wylde's talents as an acoustic musician. After a stunning instrumental intro with Wylde shredding away, the duo launches into impressive acoustic versions of "The Blessed Hellride," "Spoke in the Wheel" and a surprising "Stillborn." The performance is also captured on the DVD, which adds the fourth track, "We Live No More." The video version is amateur shot, grainy and a little unsteady at times, but the audio is perfect.

That brings us to the DVD portion of the collection, which opens with a live version of "Spoke in the Wheel" from the European "Doom Troopin'" DVD. Wylde starts the song out on stage alone and acoustic, but it builds into a rousing full-band performance. Then we get three tracks from the "Boozed, Broozed and Broken-Boned" DVD -- "All For You," "13 Years of Grief" and "Bleed For Me" -- with a powerful backing band that includes former Suicidal Tendencies and current Metallica bassist Rob Trujillo and drummer Craig Nunenmacher. That's followed by a collection of music videos including the Rob Zombie-directed clip for "Stillborn," "Suicide Messiah," the Dime tribute "In This River," "Fire It Up" and a brand new video for "New Religion."

The highlight of the DVD portion, though, is a 30-minute documentary called "Welcome to the Compound." In the video, Wylde takes viewers around his home and property, while explaining some of the inspirations behind Black Label Society songs and offering fans a look into his personal life. There are some heartfelt and sincere moments during the movie, such as when he talks about his friend "Dimebag" Darrell Abbott and the song "In This River," and fans get a look at Wylde's impressive guitar collection. But by and large, Wylde and the crew have fun with the often-hilarious documentary that shows a very different side of the guitarist than the grizzly, leather-clad tough guy image that he presents to the public.

So while Wylde's fans probably own most of this material, possibly in several forms, there are still some real treats to be found. It's also a good opportunity for those less familiar with Wylde and Black Label Society to get a look that goes beyond the videos they've seen on "Headbanger's Ball." For fans, it's well worth picking up for the Slightly Amped performance and the documentary alone.

Get "Skullage" DVD.
Posted by Fred Phillips at 8:16 PM