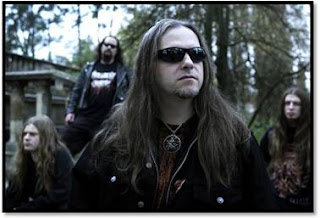 Polish death metallers VADER have announced the track listing for their new album, Necropolis (named after the first VADER song ever), tentatively due out on Nuclear Blast Records in late summer.

Necropolis is being recorded at Hertz Studios in Bialystok, Poland with the Wieslawski Bros.. Tue Madsen (The Haunted, Kataklysm, Behemoth) will mix the album at Antfarm Studios in Denmark. Album artwork and design will be provided by famed Polish artist Jacek Wisniewski.

States guitarist/vocalist Piotr "Peter" Wiwczarek: "Necropolis has its shape now. Today we finish recordings of main guitars and after a week break we coming back to the studio to make all leads, bass and vocal parts. We will show you the life in a studio, the process of creation and recording the new album. Gates To Necropolis, Part 2 is gonna be available in a week. STAY VADERIZED!!!"

Demo versions of “Rise Of The Undead” and “Impure” can be streamed at www.myspace.com/VADER.