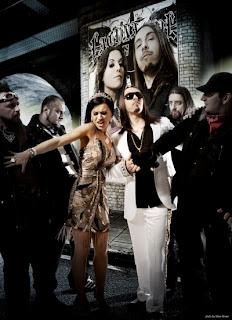 The group recently completed a new video for “Spellbound” that was shot in their hometown of Milan. To view the video, visit Artist Direct.

Cristina Scabbia (vocals) comments: “We had a great time shooting the video for ‘Spellbound’ and it also marks our first time working with acclaimed Italian director Saku in a location that's really peculiar. It was filmed in a very fashionable place: the restaurant ‘Gold’ located in Milan, Italy, which owned by the fashion designers Dolce & Gabbana, who kindly gave us the permission to film over there!

"The location provides the perfect atmosphere to express the ‘Shallow Life’ theme. Everything is really shiny and ‘bling bling’ and the band is performing in the middle of a golden room full of mirrors and giant chandeliers.

“The story is rounded out by some actors that are interpreting different aspects of being under a spell of something: the girl obsessed by her weight and look, the guy who wants to be a superman, the politician etc. We can't wait for you guys to see it and give us your impressions on the new album. See you all soon.”

A "Shallow Life" pre-order package is also exclusively available through CMDistro.com. The limited number package includes the "Shallow Life" CD, an 8x10 glossy band photo, a guitar pick, cover sticker and a choice between a necklace or belt buckle.