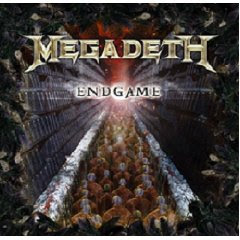 The rumors are already out there that "Endgame" could be the appropriately titled final record from Megadeth. Of course, those rumors have been swirling for the last several records.

You might say it's a small wonder that Megadeth even exists today. It's been a tumultous decade or so for the band. A few rounds of stylistic changes in the 1990s, including the awful experimental record "Risk," turned some fans off. Then there was the announcement of founder and mastermind Dave Mustaine's retirement following a nerve injury in his hand, which he eventually recovered from. The subsequent reformation included an ugly split with original bassist and long-time Mustaine collaborator Dave Ellefson, the only other constant in the band over the years, which made Megadeth an even bigger revolving door of musicians in recent years. In an effort to conquer his longtime battle with drugs and alcohol, Mustaine became a born-again Christian a few years back, which didn't sit well with a few fans of his music that has, at times, been critical of organized religion. It would be easy to understand if he just decided to call it a day.

Not only has Mustaine not thrown in the towel, but he's blasted back at his critics with two of the best Megadeth records since the 1980s, 2007's "United Abominations" and the latest, "Endgame."

"Endgame" reaps the benefits of Mustaine's sobriety and conversion, as it seems to have given him a clearer focus on the music. Like "United Abominations" before it, "Endgame" strikes a solid balance between the technical flash and mastery of the early Megadeth records and the melody and hook-based tunes of 1992's "Countdown to Extinction," which marked the band's first shift in style.

"Endgame" opens with a short instrumental piece, "Dialectic Chaos," that leads directly into the high-speed thrasher "This Day We Fight," which wouldn't have been at all out of place on the band's high-intensity records from the '80s. The more melodic side of the band comes out on "44 Minutes," a song based on the 1997 North Hollywood shootout that spawned a movie of the same name. Unlike the impressive speed and technicality of the first song, "44 Minutes" relies on a big, memorable chorus and a moodier delivery. It's a pattern that repeats throughout the record. "1,320'" revisits Mustaine's obsession with speed and features guitar work to match. "Bodies," one of the best of the more melodic numbers, would have been a perfect fit on "Countdown to Extinction," while "Headcrusher" takes listeners right back into the chaotic speedfest. None of them disappoint.

The only questionable choice here would be "The Hardest Part of Letting Go ... Sealed with a Kiss," which opens in a plaintive ballad style that amplifies the weaknesses in Mustaine's vocals and moves to a galloping number. There's a nice little almost classical-sounding riff in there, but by and large it sounds a lot like some of the weaker moments from the 1990s. The other 10 tracks on the record, though, make you forget about this one.

Of course, no one listens to Megadeth for Mustaine's voice. It's all about the guitar, and that's in fine form here. He's obviously recovered fully from the nerve injury because "Endgame" features some of his most impressive work in a lot of years. The riffs are tight and crisp, and the leads scream across the top of them like a fighter jet. Veteran metal producer Andy Sneap also deserves great credit for the mix which gives Mustaine's guitar work more bite than perhaps it's ever had.

After years of artistic experimentation, phoned in records and not knowing what to expect from Megadeth, it's nice to have them back. When you put in a Megadeth record, you want riffs that rip your face off and blazing leads that shred what's left of it. That's just what "Endgame" delivers. If it's Mustaine's swan song, they go out on a high note. I, for one, hope we can get a few more records like these last two.