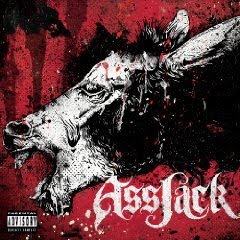 While a big fan of Hank III, I tend to gravitate more toward his country and hellbilly material than the heavier stuff that he does with Assjack. It's interesting considering my normal tastes in music, but I've always felt that III's music loses some of its character in the transition to the bashing, screaming songs of his usual final set.

That's not to say that I don't like it, and in fact, I was quite surprised by how much I enjoyed the project's long-awaited official debut record. Though many of these songs will be familiar to fans of his live show, this is the first time to get them in an official studio format.

If you're not familiar going in, "Redneck Ride" will let the listener know up front what's in store. It opens with a metallized riff from "Dixie," and after that it's rough, loud and fast. It's pretty much what you get through the whole record. Imagine a psychobilly love-child of the Misfits, Pantera and Hank Williams. If you can conceptualize such a beast, this is it. If not, give it a listen.

The Pantera influence is prominent throughout with some bashing riffs and Phil Anselmo-like screams from harsh vocalist Gary Lindsey (as if there are many non-harsh vocals to be found here.) You can hear it heavily on "Chokin' Gesture," which adds some cool spooky-sounding leads, and "Cocaine the White Demon," which has a catchy call-and-response verse between III and Lindsey and goes through a few transitions in its four and a half minutes. There are some more surprising influences to be found on the record, though. Alice in Chains plays a part in the vocal melody of "No Regrets," and "Wasting Away" also blends some Alice in Chains sounds with a cool doomy verse and some of the stylings of his country material. It's more like a pissed off version of one of his country songs than any other track. There's also a hint of more modern music on "Smoke the Fire" which is reminiscent of System of a Down's "Chop Suey," only with more insanity and violence.

There is plenty of influence from his country and hellbilly stuff here, as the metallic often meets the redneck. "Tennessee Driver" is one of my favorite tracks, opening with a sludgy riff that explodes into a redneck stomp that's more in line with his hellbilly material. It's got the right mix of southern sounds and thrashing breakdowns. "Gravel Pit" also brings a bit of the south to the record as one of the more melodic tracks. It features some solid grooves, and even a traditional metal turn about halfway through.

Like most of his records, Assjack's debut reflects the band's founder. It's honest, abrasive and occasionally quite ugly, but it definitely gets the job done. After years of wrangling with a record company that wanted to turn him into the second coming of his grandfather, we're finally seeing more official material escape the Hank III camp. Here's hoping a lot more of all three of his styles will be coming in the near future.

Posted by Fred Phillips at 6:02 AM