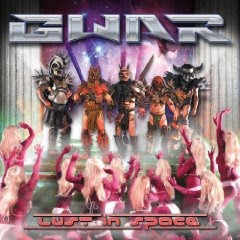 Everyone's favorite horror/art/metal band Gwar returns to celebrate its 25th anniversary and continue its effort toward domination of the earth on "Lust in Space." And they may just manage it this time around.

After a series of hit and miss records, "Lust in Space" finds the band back on Metal Blade and back to doing what made their earlier work so enjoyable. "Lust in Space" features a collection of fun, hummable songs with a few truly goofy moments mixed in. I mean, it wouldn't be Gwar if there wasn't a little silliness, would it?

The record opens with the high-energy "Let Us Slay" that features the cartoonish over-the-top vocals we've come to know and love, but there also seems to be just a bit of a modern edge to this record. It's not a change, really, just an update. For the most part, the songs here are still along the lines of the same punk-influenced thrash Gwar has always delivered, as evidenced on "The UberKlaw," a punkish number with some crazy gang vocals on the chorus. Fans of the band's earlier work will appreciate songs like "Where is Zog," which is mocking and completely over the top. It really reminds me of something off my personal favorite Gwar album, "Scumdogs of the Universe." Those newer to the band might appreciate the Meshuggah-ish riffing of "Release the Flies," which finds Oderus Urungus (Dave Brockie) taking on a gruffer, almost death metal vocal style.

One of the things that has been the hallmark of Gwar's work in the past is the fact that, despite the costumes and wild stage show, despite the ridiculousness of some of the lyrics, despite all of the novelty trappings, their songs have always had a sound metal underpinning. That continues here, perhaps better than it's been in recent years. "Metal, Metal Land" blends thrash, punk and NWOBHM sounds for a strange brew that's a bit silly lyrically, but one of the most fun songs on the record. "Price of Peace" covers the classic conquer-the-earth Gwar material, but features a great squealing opening guitar riff. Gwar save the best for last, though, with the title track and its shifting moods. It opens with an acoustic riff and spoken vocals from Urungus, then moves into a Nevermore influenced warbly bit where he does a fairly good impression of Warrell Dane. It finally settles into more of the expected Gwar sound. It's solid, it's catchy and it's hard to listen to without a smile on your face.

The same can be said of the record as a whole. If you're a Gwar fan, you'll love this record as the band gets back to what it does best. If you hate them, it won't change your mind. While, in my mind, it doesn't quite live up to "Scumdogs," it's pretty damned close.

Get "Lust in Space."

Posted by Fred Phillips at 7:02 AM