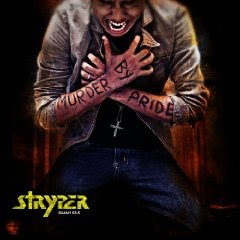 I suppose it's inevitable that most any band that had some measure of success will reunite at some point, usually putting out a throw-away record so they can hook up on one of the summer nostalgia tours. That's pretty much what I expected from 1980s Christian rockers Stryper's latest record.

Don't get me wrong, I rocked out a few times to "Soldiers Under Command" and "To Hell with the Devil" back in those days, and I still whip out Oz Fox's riff from "The Way" every now and then when I'm noodling around on my guitar. But, by and large, Stryper was always a little too clean-cut for my tastes. It had nothing to do with the Christian lyrics, but everything to do with Michael Sweet's saccharin sweet vocals and the too-polished sound of most of their songs. Unfortunately, that's still a problem in 2009.

"Murder by Pride" definitely has that Stryper sound, but with a very heavy 1970s arena rock influence -- so heavy that they've even got a carbon-copy cover of Boston's "Peace of Mind" complete with guitar work by Tom Scholz.

There are, surprisingly, signs of life. There's a nice big guitar riff from Fox that opens second track "4 Leaf Clover," and Sweet's vocals are a bit more restrained on the verse. The chorus is bubble-gummy, but it's not a bad song overall. The title track has some nice guitar work that reminds me a bit of the heavier songs from the band's earlier catalog. It's probably the best track here -- maybe the only one I might return to on this record. "Mercy Over Blame" is perhaps the grittiest tune on the record with a nice 1970s hard rock feel to it. Album closer "My Love" is another big rocker with some nice dual-guitar lead work and another heavy '70s influence.

Then there are the other moments: "Alive," a sappy piano ballad that attempts to be this record's "Honestly;" the dated 1980s pop rock influenced "The Plan;" the contemporary Christian sounds of "I Believe." The latter might actually score them a hit in that format, but not so much with hard rock fans.

The songs in between are all OK. They're listenable, but a bit like wallpaper. They fit the record, but don't really standout. As you might have figured out from the song titles, Stryper is fully back in Christian mode on this record, unlike the more commercial "Against the Law" in 1990, which turned some fans off and got their records thrown out of some Christian book and record stores.

I went in with low expectations, and surprisingly, "Murder by Pride" isn't nearly as bad as I thought it would be. In all honesty, if there should be some reason I need a Stryper fix, I'd probably dig out one of their early records rather than grabbing this one, but if you were a big fan of them the first time around, you'll probably enjoy this one.

Get "Murder by Pride."