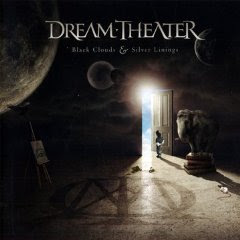 I'm a little late in reviewing this, but I wanted to give it some time to sink in. I bashed Dream Theater's last record on a quick review, and I ended up quite liking it. I wanted to make sure that didn't happen this time.

On "Black Clouds and Silver Linings," Dream Theater is back in full prog mode. You can tell that by the tracklist. The CD is packed about as full as it can get with music, and there are only six songs, the longest, "The Count of Tuscany," checking in at nearly 20 minutes, the shortest, "Wither," clocking about five and a half.

I apologize in advance for the length of this review, but there's so much going on that it's practically impossible to write a complete review that's brief. There are just too many twists, turns and shifts. If they wrote songs like most bands, they could get six or seven out of each of theirs.

Album opener "A Nightmare to Remember" gets things off to a rolling start with a heavy opening that borders on extreme metal with its crunching guitars and rolling drum line until the keyboards kick in. Vocalist James LaBrie takes on a dark, cutting delivery that reminds me of Jon Oliva in places. The tune slows down about the four-minute point, but remains dark for the next few minutes. We come out at about the 7:30 mark with a bluesy, rocking, jaw-dropping solo from John Petrucci that leads to an extended bit of madness on his part. Drummer Mike Portnoy makes a vocal appearance to give a deeper sound to a thrashy bit toward the end. The record's off and rolling to a good start.

"A Rite of Passage" is one of the less adventurous tracks on the record, but also one of my favorites. It's among the shorter tunes at around eight minutes, but features some more aggressive elements in the way of vocals and guitars. It's reminiscent of their one mainstream hit, "Pull Me Under," with a catchy chorus melody.

"The Shattered Fortress" is on the gnarly side for Dream Theater, which is a good thing. It opens with a heavy riff that moves into a melody with a feel reminiscent of some of the pirate metal bands popping up lately thanks in large part to the soaring keys of Jordan Rudess. It moves back to a thrash riff about two mintues in with Portnoy providing some snarled supporting vocals for Labrie. After a soft interlude where a deep spoken word bit (Portnoy again?) trades off with Labrie's vocals and finishes strong with a rolling heavy riff that leads to more histrionics from Petrucci.

The album is capped off with the epic "The Count of Tuscany," which while a bit too long, certainly shows off the band's skills. It opens with a heavy Rush influence before moving to an "Images and Words" feel. LaBrie's vocals here are in a very classic hard rock mode, and he uses the more aggressive vocals he's worked on recenlty here as well. The slow, atmospheric interlude that kicks in around the 10-minute mark probably could have been cut drastically from its four-minute run time and helped the song. A simple, Pink Floyd-ish acoustic piece follows that leads into a majestic close.

Now for the not-so-good. The ballad "Wither" is certainly the weakest link here. It's the most straightforward song and thankfully the shortest, and really doesn't have much excitement at all. "The Best of Times," despite some strong moments, is a bit too vanilla for my tastes as well, and goes on far too long at 13 minutes.

If you pick up the three-disc limited edition of the record, you'll also get a collection of cover songs that has some real fun in store. My favorite, unsurprisingly, is their fairly faithful cover of the underrated Iron Maiden tune "To Tame a Land." The Dixie Dregs' "Odyssey" gives the a chance to really put in a musical workout with its twists and turns. They pay tribute to a big influence with a cover of King Crimson's "Larks Tongues in Aspic Pt. 2," and rock out on Rainbow's funky "Stargazer." Perhaps one of the most interesting of the cover songs is a medley of Queen tunes, "Tenement Funster," "Flick of the Wrist" and "Lily of the Valley," and it doesn't disappoint. I like the fact that they chose three lesser known Queen numbers instead of a big hit. In fact, I like that about all of the covers, and I don't think there's a bad one in the bunch. It's well worth the few extra bucks for the limited.

It goes without saying that the musicianship here is impeccable and masterful. The band members continue to boggle the mind on all levels and frustrate wannabe musicians like myself who realize that, even if they spent the next 40 years locked in a room with their instrument, they'll never be that good.

In the end, I'm glad I gave the record some time to grow on me, as my initial impression was much the same as the last record. I still think there's a little too much "show off" on "Black Clouds and Silver Linings." Don't get me wrong, what Dream Theater can do is incredibly impressive, but I think that sometimes it comes at the expense of the song. It's not a record for casual listening on the drive to work (there are songs on here that would cover the morning drive, the afternoon drive and the next morning's drive), but like most of their efforts, something that needs to be experienced in full and digested.

Get the 3-CD limited edition.