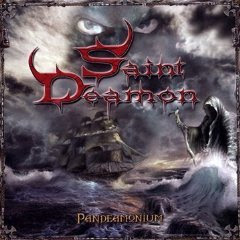 Inevitably, as a reviewer, you get to that point, usually staring at a stack (or virtual stack, these days) of mediocre albums, where you question why you bother. Aside from the records by known bands where you pretty much know what to expect, you'll find a few you like (which are easy), a few you hate (which are even easier) and tons of middle-of-the-road records where you struggle to say anything good or bad about them. Then, maybe a couple of times a year, one comes off the stack that reminds you why you spend time listening to all the others.

When I gave Saint Deamon's "Pandeamonium" it's first spin, I didn't expect much. I thought the band name was a little corny, and it was a power metal record - a subgenre known for more than its share of cheese. My preconceptions were immediately shattered by the throbbing, Dream Theater-inspired riffing that opened the first song, "Deception." The band eschews the typical over-the-top arrangements and bombast of the genre, focusing instead on tighter songwriting and memorable songs. It's a welcome respite from a genre where bands often try to outdo each other with the grandeur of their concepts.

The roll continues with second track, "The Only One Sane," a soaring track with just a touch of the unbalanced. It's got some nice melody shifts that will feature more prominently later on the record. But the track that really sold me on the record is the fourth, "Eyes of the Devil," which opens with a thrash riff, reminiscent of "Justice"-era Metallica before shifting into a more typical power metal mode for the verse and chorus, which is, as it should be, huge and memorable. It's a song that even folks who hate power metal on general principle could appreciate.

The band can also muster the pomp and bombast of others in the genre, as they prove on the epic, seafaring tune "Oceans of Glory," and there are moments of the majestic sprinkled throughout "Pandeamonium." They work, but I'm more drawn to the simpler structures, like the galloping riffing of "Fallen Angel" or the blazing "The Deamon Within," which reminds me a lot of classic Iron Maiden in its verse vocal melodies.

There are a couple of tunes here that fall a little more into a typical power metal sound, primarily the slower numbers like the title track and "A Day to Come," but they're the exception. More often, you'll find yourself humming along with an insidious melody like the chorus of "Fear in a Fragile Mind" that remains with you throughout the day.

There's nothing new or earth-shatteringly different about the music here, but its played with passion and conviction - a rarity in a genre that, if we're being honest, can be a little paint-by-numbers. There's also a refreshing lack of the pomposity and grandiose concepts that often plague power metal. The songs are focused, well-played and stand on their own. It's a good record for those who prefer the pioneers of the genre.

While it serves as my introduction to the band, "Pandeamonium" is actually the sophomore effort from Saint Deamon. You can be sure that I'll be seeking out their debut very soon.