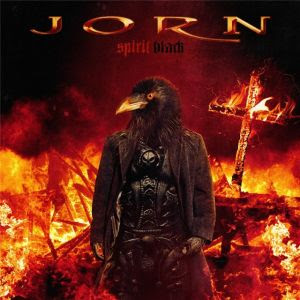 I've long been an admirer of Jorn Lande's voice. It's classic in every sense of the word -- powerful, distinctive and memorable. He also surrounds himself with top-notch musicians who can deliver solid hard rock numbers. So I always look forward to a new record, and "Spirit Black" doesn't disappoint.

The title track lets the listener know right away what the record is about. It opens with a grooving heavy riff, big soaring vocals from Lande and a memorable melody. Actually, I could almost say repeat that formula 10 times and leave the review at that, but the record deserves more. When I say "repeat the formula," I certainly don't mean to imply that all of the songs sound the same. While all in a similar framework, there are some interesting variations. "Below" opens with a little bit of a funky lick. After the expected big opening guitar riff, "I Walk Alone" settles into a bluesy groove for the verse, with a strange guitar effect uner the vocals that sounds almost like a spacy reggae lick.

As with most of Lande's work, there's a very heavy influence of early Dio. It crops up most prominently in "Road of the Cross" with its chunky, chugging guitar riff and exotic lead melodies. It's got one of the better choruses on "Spirit Black" and serves as one of the best tunes here.

The "formula" does often make for some less than memorable numbers, though, and you can expect a few on each record. Here, you have "Rock and Roll Angel," which after a nice acoustic opening, gets kind of vanilla in the heavier parts. Likewise, there's not much memorable about "World Gone Mad." At other times, though, it works to perfection. "The Last Revolution" is a classic hard rock number featuring one of Lande's better vocal deliveries, while "Burn Your Flame" is a ripping old school rocker with shades of Led Zeppelin and some of Whitesnake's earlier, more raw work.

There are a couple of off the wall tracks here that get different results. "City Inbetween" has a bit of a strange melody with some Zeppelin influence on the chorus, but the big harmonized chorus comes off as a little cheesy to my ears. The other, album closer "The Sun Goes Down," gets a much better reception despite being stranger. An ethereal, atmospheric bit gets the song started with the focus entirely on Lande's vocals. The song is a little poppy in places, and the explosive synth effects sometimes sound like the soundtrack for a Star Wars-style space battle, but somehow they work. The huge, epic guitar solo certainly doesn't hurt either. It's an interesting track that bears further listening.

"Spirit Black" delivers exactly what fans expect from Lande and Co. There aren't many surprises, but that's not always a bad thing. It's certainly not here.

Posted by Fred Phillips at 5:52 AM